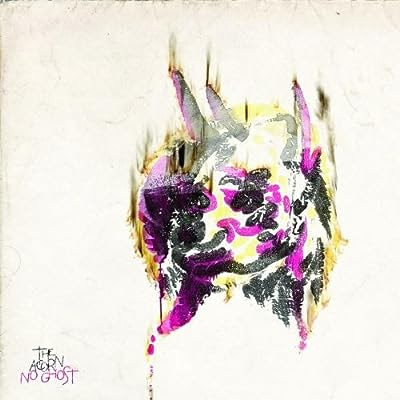 The Acorn's 2007 (2008 here) album Glory Hope Mountain was such a complete and inventively invigorating work, full of optimism and specific emotion even for something raised in the high concept metier, that the only thing they could do was broaden out. Re-emerging into a world that's experienced Fleet Foxes and their bretheren, some of No Ghost seems like a reaction against the driven nature of that work while retaining the percussive momentum and personal charge as best they can. What resulted isn't a showy album but one that gets by on its strength of character while darting across the spectrum from dirt encrusted Americana to maze-like interplay like Talking Heads gone to the country.

There's an added bounce to the record's high spots: Restoration feels like the busy drumming is physically driving Rolf Klausener onto newly stratospheric heights, the title track a warm springtime lament, Bobcat Goldwraith a backwoods Neutral Milk Hotel. Crossed Wires comes close to what those of us who don't listen to daytime radio any more think would be a great crossover hit, all shuffle and sunny harmonies belying their content, and when a band can have a song called Slippery When Wet and it be affecting Sam Beam-recalling fingerpicked folk wistfulness you know they must be on to something. The Acorn evidently aren't just for fads, their propulsive while delicate gorgeousness is for life.