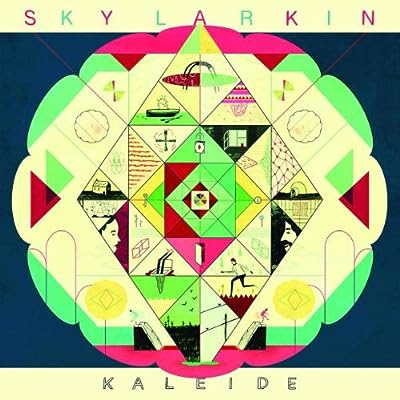 As the least immediately opaque among their British band associates, Sky Larkin have had to consistently prove their worth as off-centre melodicists of a unique stripe. On some level it's unique enough in British alt-rock at the moment that they have a female singer-guitarist, granted, but their second album gave them the opportunity to thicken up The Golden Spike‘s punchy guitars and roughshod melodies into something that while sounding more honed and able doesn’t sacrifice what they're good at, rather reinforces it with extra heavy material.

Maybe the reason they don’t hit everyone immediately is they tend to write songs that insinuate and blossom into their full potential on the third or fourth pass, when the sort of lyrics that seem oblique up until then click into place and the twisty, stop-start nature of the guitar becomes more apparent. The optimistic jagged stomp of Tiny Heist twists itself tightly round bustling drums before a wrongfooting minimal mid-song breakdown. The beefy, Seafood-esque Spooktacular speeds through with what seems a renewed sense of purpose until a point where the guitars and bass sound could get no more huge, aided by Katie Harkin's vocals, more nuanced than before. Still Windmills uses the non-moving energy-giving buildings as a metaphor for human possibility, managing to get away with the couplet “I know there’s a precipice, not saying it’s a piece of piss”. While they’ve always used the Korg for more unsettling moments, here throbbing keyboard and decorative piano settles around a plaintive, emotionally charged vocal on Anjelica Houston and it’s only afterwards you realise the whole song had allowed itself to be built around one intriguing line. Year Dot meanwhile rides on organ, something almost danceable and criss-crossing multitracked vocals atop ending up in a gang chant of "one pile of bones so they know we were friends". It's an imaginative, tensed up record, never neglecting the lyrics or melodies but being able to twist them into intelligent, fascinating shapes while still within the angularly tight power trio formation.