Sweeping The Nation Albums Of 2010: Number 2 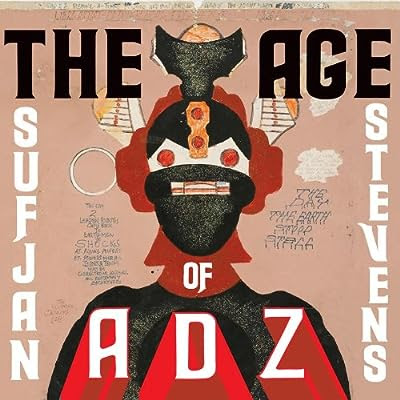 The first track on The Age Of Adz, Futile Devices, is a loving folk meander, a tribute to a partner of whom Sufjan avers "when I sleep on your couch I feel very safe", so much so he runs out of words of praise in the end as in the circumstances they are, yes, futile devices. It's personal and sensitively touching in a cracked way. The last track, Impossible Soul, lasts 25 minutes. It begins as keening balladry against echoey drums and pulses, the latter of which occasionally glitch up, launches into a Prince-like solo of either synth or guitar (or both), breaks into broken beats, introduces what may or may not be a second vocalist, introduces samples and cuts of brass and strings, breaks into gang vocal chants, devolves into funk, brings in a George Gershwin choral section, dissolves into washes of random bleeps and half-audible caws and the repeated line "don't be distracted", launches into an Auto-Tuned soul vocal section and a couple of minutes later odd computerised beats to go with it. That's half the song covered. And we've not even got to the 80s breakdance beat breakdown, apparent Funkadelic tribute, ambient bit or, in what may be a callback to square the album's circle, fingerpicked folk coda. It's so ridiculous it deserves to be released on its own independently from having to follow anything or be judged as a mere track on an album. And to think this album was preceded by an EP, All Delighted People, that was, frankly, no good.

The album, and its title, is derived from Royal Robertson, a paranoid schizophrenic artist and self-proclaimed prophet whose works are like action paintings or crazed comic strip panels of B-movie imagery, references to the Book of Revelation and futuristic nightmare scenarios. Learning all that, you kind of get the idea where Sufjan is coming from with this mess of stuff. While he's musically been this way before, on 2001's Enjoy Your Rabbit (except that was wholly instrumental), and has a history of leaping gleefully across the genres (he was initially noted as an associate of the Danielson Famile) the move from symphonic American folk to digital wash has been much discussed, but what hasn't been sacrified despite every kitchen sink in the mix is Stevens' gradiose sense of melody, the thing that allowed him to turn from lo-fi bard to mini-orchestra score writer almost without anyone batting an eyelid. These arrangements are as borderline overfull as his analogue instrument compositions, yet below the rattling beats, sliced and diced samples, electronic textural rushes and sci-fi bleeps, fragments of things flying past like spectral comet trails, there's pretty much always a radio-ready basic line. The aptly titled Too Much rattles in between a videogame pinball machine that threaten to turn industrial as much as they're IDM before, three and a half minutes in and still three from the conclusion, brings in some colliery trombone and then some fluttering woodwind and strings as becalmed as the beats still aren't. And then he brings everything in at once and the whole thing nearly ends in a carnival of something or order. The very next track, that of the title, begins with a recreation of the sound of aliens with lasers for eyes fighting the performers of a choral concert. And yet it always leaves a gap in the middle where the very soul and care of Stevens' compositional skills and glorious ear for deceptively simple melody can thrive, and where snatches of lyrics addressing inner turmoil (in character or not? Remember the lyrics to John Wayne Gacy Jnr) Eventually you almost get used to the idea of malfunctioning laptop sounds pressed up against great classical-showtune orchestrations - choirs, cathartic proclamations, suggestions of love falling apart and otherwise, the works. What a one off, singular, ridiculous, glorious 74 minutes The Age Of Adz is.