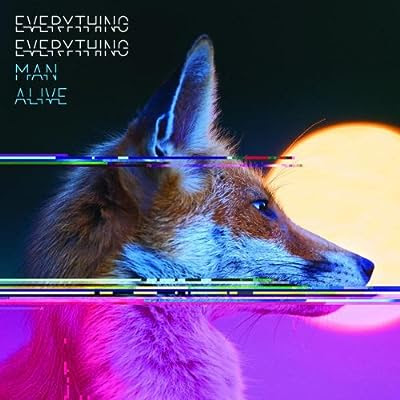 Everything Everything don't want for ideas. At a time when plenty of bands are happy with one, they're clearly people who take in a lot of music while retaining the curiosity of seeing what happens if you put A against B. They're not going to pretend to be less smart or indeed clever-clever then they are because, operating as they do within the walls of art-pop, they exist in a world to show off their new tricks, their funny synth sounds and their falsetto four-part harmonies. One moment they're R&B producers stuck in a guitar-bass-drums network, the next Queen stuck with a bedroom four-track. The result is fascinating, ambitious and no small amount of odd joy.

It's when you try to work out what they're actually singing about that you run into trouble. Not only does Jonathan Higgs have Britain's most divisive high pitch, but he delivers lines as if he's out of breath and trying to impart as much information between gasps as possible, running words and lines headlong into each other and then it turning out they didn't make much linear sense then. It means mondegreens aplenty, but it also means they don't sound like anyone else achieving some level of attention in Britain much at all, even if they do inhabit shards of Super Furries, Cardiacs or Wild Beasts. Like the former they've been careful to find a successful way to fold modern electronica into the four piece standard, as with Qwerty Finger's cut-up loading noises dancing freely over the top of a fast paced coasting rhythm track. The skeletally humming Leave The Engine Room borrows from minimal house, Two For Nero baroque harpischord backed chant. Schoolin' uses a four note electronic whistle where a big hook would go and ending up somewhere beside a less 'rock'-indebted N*E*R*D production. Listen to that bridge, like a Daft Punk Discovery sequence impersonating a heroic guitar solo. It's indicative of an album that borrows liberally rather than outright theft indulgence, doing so to pick out their own space in a crowded market with eccentric acrobatics of genre, melody and time stuffed into place to make an odd kind of sense.

MY KZ UR BF