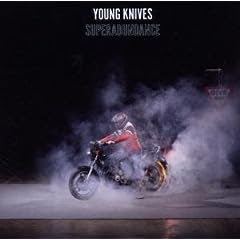 Note: Voices Of Animals And Men was by The Young Knives; Superabundance is by Young Knives, apparently because Henry Dartnall didn't want to be associated with the other 'The' bands (although it looks like they might have swapped back now). Indie rock band with straightforward post-punk riffs they may well be, but there's something very 'other' about Young Knives, not just the dress sense and stage banter fripperies but their awareness of music and of what this sort of thing should be doing. Superabundance isn't tremendously progressive from that debut, but it's founded on a refusal to grow old gracefully. No, not like Blink 182, like one of those classic British poets - and they're still very definitely and defiantly a British band - who becomes more splenetic as age increases.

Fit 4 U, fundamentally a straight up power trio opener with fine echoey guitar delay and a big riff chorus, opens with a dismissive "home is where the house is" and in a repeated bridge line asks "hey runner, what are you running from?", another example of the band's ability to make repetitive hook lines out of the unlikeliest concepts (see also Terra Firma's "fake rabbit, real snake" chorus) Counters sounds pissed off at the outset amid Jam-derived riffs, skittering hi-hats and dog barks before hitting "sitting in the front seat, turning on the motor/Sucking on the hosepipe, keep it turning over" as a chorus. Turn Tail's queasy string stabs give it a peculiar grace even as House Of Lords specifies that we're all going down with him ("we're all slaves on this ship, this ship's sinking/We will not reach the shore"). I Can Hardly See Them is a fuzzy psych out with tribal drumming, echoed to an extent in the disturbed low-key Mummy Light The Fire, while Rue The Days seems to be an attempt to channel the whole of Modern Life Is Rubbish into 3:46. Superabundance is no Modern Life Is Rubbish, but its heart is in a similar place and when the landfill indie smoke clears so could Young Knives' future.