Sweeping The Nation Albums Of 2008: Number 5 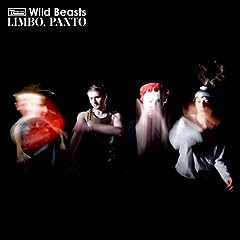 What an extraordinary album, especially for a debut. Although we'd had warnings through three singles of varying clomping funk and theatrical falsetto, little prepared us, or probably anybody outside the band, for what a quantifiable leap Wild Beasts would take when it came to the full length discipline. Full of Kurt Weill-in-Grand Guignol-via-Berlin cabaret and Noel Coward theatre and straining flamboyance, Limbo, Panto is a record that, and how about this for something you don't hear too often of a British guitar four piece in 2008, has no obvious contemporaries. Sure, their shared Kendal upbringing with most of British Sea Power informs opinions in a certain way, but their respective ideas of big musical gestures divulge quite a bit. And yes, like so many others of the last five years the output of Postcard Records figures highly, but where others took Orange Juice's dancefloor rhythms Wild Beasts take the intricate interplay, funk undertow, pointed guitars and extraordinary pop sweep. And yeah, Hayden Thorpe, the very definition of a Marmite vocalist, sounds like Billy Mackenzie, albeit while the late Associates singer's voice was breaking, maybe some Tiny Tim too. While it seems to be the voice that has inspired the writing to such theatrical, out of time heights, everything is spot on and as it should be for a band creating their own referential playpen from the off. There are songs about sex and football, it's just they're called She Purred While I Grrred and Woebegone Wanderers.

Even Thorpe's lyrics are coyly, lascivious and camply curious as Morrissey once was, especially so with that swooping and pirouetting voice, desperately straining for meaning among the arcane, catherine wheel lit streams of consciousness. The Club Of Fathomless Love starts like a carousel as Thorpe, probably ironically, states "I've rallied, rucked over and rabble roused, have I not?" before backing his machismo by asserting "I'm not a soft touch and I won't been seen as such... I spit and have spats to be tough, show I'm not soppy and stuff". Again like the younger Morrissey, The odd grace of The Old Dog, which "I regret" there's life in, starts "casual sex with a hard up thug". "I only winded that lad before he bolted, and I only fumbled that lass, besides, I was revolted" he, erm, explains on the ghostly waltz with bass backing vocals Please Sir before breaking new recorded lyrical ground by affixing doe eyes on the listener and appealing "take this chips with cheese as an offering of peace". Understandably underrated given what's out front, this is one tight unit. The Devil's Crayon especially runs like clockwork, allowing Tom Flemming to bring his elegant Edwyn Collins baritone to proceedings, although Thorpe butts in several times, on the last of which he avers "we are so much moulded dough". Woebegone Wanderers is about lower league football. It starts "unstable stands afflush with fans pilfered piles and pints in wobbly hands", declares "I'd swear by my own cock and balls and the family home's four walls" and eventually declares in quiet desperation "The players are slack, the boss has been sacked, just win the big match/It's all I can ask..." It's only on checking the booklet that you realise Flemming's coda backing vocal Greek chorus is in fact "who are yer? Who are yer?" Just as extraordinary is the way the tune passes from Orange Juice railway track post-punk-funk into waltz time seamlessly. Twice. And both times Thorpe goes along with it without breaking stride. Brave Bulging Buoyant Clairvoyants eventually makes a break for the near enough straightforward indie dancefloor with its woodblock and its haltering punk-funk suggesting chicken-like neck movements aplenty but, well, it's called Brave Bulging Buoyant Clairvoyants and features the lyric "race me race me race me race me!" As the polyrhythmic show closer in all senses Cheerio Chaps, Cheerio Goodbye waves the listener off the full scale of what's just marked out its ragged territory here is revealed. It's bewildering, it's expressive and extraordinary, its vision is kaleidoscopic, it's graceful and harsh at the same time, and it's magnificent.