Sweeping The Nation Albums Of 2008: Number 2 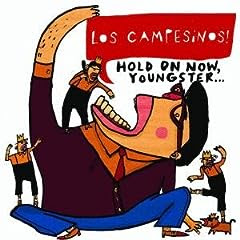 It wasn't so much that Los Campesinos! arrived at the right time that made us fall for them on first listen as that they slotted into the gap kept open for too long now for a refined version of those numerous other bands kicking against the commercial pricks. Refinement in a way that might not be immediately apparent, of course, what with all the shouting and the glockenspiel and the packing everything into the sonic space allocated, but there's that intangible something in the way they arrange their myriad parts and labours into serrated melodies while firing off modern aphorisms at many a juncture that can't help but drag the listener behind them on their journey. Their multitasking led to many a Broken Social Scene comparison (their Dave Newfeld produces) in the early days of their rise, but Hold On Now, Youngster... proved it's not as easy as that. Los Campesinos! deal in making the little things bigger, the finer points of social nitpicking seem like universal truths. They feel like a gang against the world, whether that be music or actual - the surname nonimature, the writing credits to 'Team Campesinos!', the gang shouts and desire to push everything over the top while not actually into the red overload. They're children - OK, young adults - of the modern musical age too, cherrypicking influences from all over the place to mould into a whole that's not so much cohesive, as that would suggest it never threatens to fall apart under pressure, as resembling a Heath Robinson contraption of avant-indie-pop. Kamikaze leaps into the musical abyss never sounded so frantically fresh and vital.

Listen to the start of Broken Heartbeats Sound Like Breakbeats, a shouted roundel of "one! Two! Three! Four!" before everything takes off at once as the guitar riff threatens to speed even further into the horizon. Gareth Campesinos! meanwhile is unhappy, wanting to "be the beacon of hope that you'd always expected", which eventually leads him to fall on the side of "the slow steady choppers" and "the hieroglyphics that the fan club sent us" before, stuck for any further way to express his frustration, he decides to impersonate Crazy Frog instead, the band before long slowing to end of night dance speed. What does it all mean? It's probable the band don't know, but it sounds like the most necessarily urgent message. But if that's all they had the album would come across as far more one-paced than it is; fortunately the Trojans inside the wooden horse have a finely tuned sense of irony, a careering emotional compass and a basic need to, as they were to nail it next time, shout at the world because the world doesn't love them. And not just about love - Don't Tell Me To Do the Math(s) has issues with authority in learning, obliquely referencing Oranges Are Not The Only Fruit, while And We Exhale And Roll Our Eyes In Unison is pop's first song to openly bait Conor McNicholas (he didn't notice) before making wider points about the treatment of women in pop culture. Then again, My Year In Lists expresses life lived through long distance communication and contains the unbeatable line "nothing says I miss you quite like poetry carved in your door with a Stanley knife". By Knee Deep At ATP they're on the verge of parodying themselves, adapting a Camera Obscura song title and starting at the same clip as everything else before revealing they don't have to, going slow as Gareth considers his own system of values, helpfully concluding "I need new hobbies, that's one thing for certain". This Is How You Spell "HAHAHA, We Destroyed The Hopes And Dreams Of A Generation Of Faux-Romantics" is a magnificent title and is also magnificently literal, another dumping/dumpee song but this time at shallow self-appointed lost souls and "every quotation that'd dribble from your mouth like a final, fatal LiveJournal entry", as Gareth puts it during a spoken word section that comes on like Comet Gain's David Feck overcome by a bout of humility. Feck would certainly admire the way We Are All Accelerated Readers shrugs love off entirely, the moment of clarity coming when Gareth realises "if this sentimental movie marathon has taught us one thing, it's the opposite of true love is as follows..." Everyone: "Reality!" Then it promptly undermines its own argument with indiepop's Stairway To Heaven, the 6:45 of post-rock opening, riff-thrusting, alternately lyrically sarky, self-deprecating and triumphant monolith of indie dancefloor pulsation that is You! Me! Dancing! Cities have been built on less. By the "one blink for yes, two blinks for no" outro to revenge as dish now served warm song Sweet Dreams, Sweet Cheeks it's blindingly apparent that Rousseau was more right than he'll ever know with that stuff about man in the state of nature - we're undeveloped, we're ignorant, we're stupid, but we're happy.

I'm intrigued, fill in a layperson on the Conor McNicholas thing?

McNicholas in the press release on the NME Cool List a couple of years ago: "This year's Cool List is a testament to the raft of hugely talented women who have taken hold of the music scene in 2006. From Beth to Lily to Karen, they've brought new energy to a scene dominated by men. They're also living proof that you can still rock a crowd when you're wearing stilettos."

And we Exhale... opening lyrics: "It's bad enough you ever use the word as an adjective/But to suggest we do it in heels is really quite crass..."

(Gareth on DiS explaining the same song: "A song about misogyny and sexism within the mainstream music press and amongst all too many music fans")

Yeah, I was familiar with the general meaning of the song. But that is interesting. Good work the Gareth.

HYPOTHETICAL QUESTION: if you'd decided to include it in the big countdown, where do you think WABWAD would have been?

Aaaand now you know why I didn't ultimately include it. I do think it's grown to become at least the equal of HONY, but ultimately it's like choosing between your children - one wants to race in and put the world to rights, the other is cowed and lost by realisation, both pack everything for the journey.

While we're on Gareth's interconnected lyrics, by the way, Ways To Make It Through The Wall opening "I think it's fair to say that I chose hopelessness" - repudiation of both My Year In Lists ("at times like this hopefulness is tantamount to hopelessness") and We Are All Accelerated Readers ("you should have built a wall")?

For any other band I'd suggest you're reading too much into it; in this case, you might be on to something.