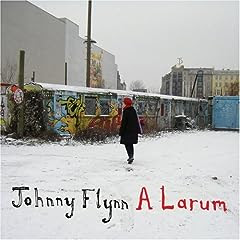 There are certain things it is obligatory to mention every time Johnny Flynn is reviewed. That he's quite handsome, for a start. That he's a Shakespearian actor, with the Propeller theatre company, and has worked under Kevin Spacey at the Old Vic. Former choirboy, went to Bedales public boarding school (as did Lily Allen and Luke Pritchard, neither of whom have it mentioned half as much), related to Jerome out of Robson & Jerome, the works. And of course none of it matters - Flynn hasn't claimed to be the authentic voice of the streets, but A Larum reveals his actual area of study to have been a rootsy synthesis of the American blues and trad folk that gave rise to Americana (and Gram Parsons was no projects kid) and English folk, both original and revival. You can imagine Flynn sounding of a piece next to John Martyn or Martin Simpson as much as Will Oldham or the Fence Collective.

How much of that is due to American producer Ryan Hadlock is unclear but the previously released songs sound like they have a new lease of life, all follow-the-leader choruses and violin reels. Most obviously Tickle Me Pink has undergone a radical makeover from its demo and original 7" release, from violin-centred considerance to The Sussex Wit's Johnny Cash gone Appalachian country dance without changing a word, which makes the whirl backing "pray for the people inside your head for they won't be there when you're dead" all the more striking. That said, accomplished and fleshed out though these songs are, there's still echoes of the anti-folk scene Flynn initially gained hints from as much as that certain archaic rootsiness. The latter is exhibited in the fragile fingerpicking and world-weary aspersions ("I could be somewhere else, I should be someone else") against blasts of mournful jazz trumpet of Brown Trout Blues. The former shows its face in Wayne Rooney, which isn't about Wayne Rooney or football at all (which didn't stop the Times putting it at number eight in their recent chart of the best songs about sport ever, ahead of Half Man Half Biscuit) but starts with the arresting line "you're one of those elephant hunters from Ebbsfleet", sees someone credited with playing the Hoover and carries on with complex fingerpicked guitar that speeds up and slows down on requirement. A strong narrative storyteller - The Box about a homeless down and out dying by the side of a railway track, The Wrote And The Writ defrocked priests, the trumpet voluntary and shouting driven Hong Kong Cemetry about visiting a relative's grave, seemingly based on reality ("1952 was the year I lost you", though?) and featuring a spoons break - Flynn's whiskied vocals suit this kind of freewheeling folk circle, by turns joyous and wracked, just as good approachable folk music should be.