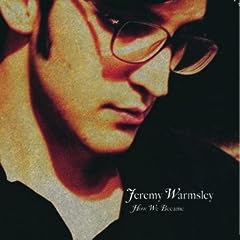 How We Became: Jeremy Warmsley's pop album. Or what passes in his mind for a crossover pop album, that is to say something on nodding distance with simpler structures and commercial potential but finding it really can't make the commitment. There's fewer overt electronics and less sprawling scope towards throwing everything at a wall and seeing what sticks bravado than on our third favourite album of 2006, The Art Of Fiction, but there's a new found self-assurance and playfulness while retaining the vulnerable literate philosophising of yore, less whimsy, more directness. Think where Patrick Wolf tried to take his self-contained world commercial on The Magic Position but without the self-created image to keep up to hold him back. Or ambition to sing with Charlotte Church.

The dichotomy between being on a label affiliated to a major and being one man and his vat of ideas is shown beautifully on opener Lose My Cool, on the face of it a deceptively simple songwriterly piece, a half-speed keyboard driven Shins-esque lament cut into which is a chorus that pretty much rocks out, but given extra edge by the switches between live and electronic drums and the electronic lurches for decoration. 15 Broken Swords has ba-bas where the big chorus should be and a hesitant stomp where the radio-friendly bits should have gone, the title track comes on like the Postal Service suffering a sudden attack of very British doubt and nostalgia, while Dancing With The Enemy is a piano, sax and drum machine cheerful pop song in which romance overcomes the complications of the Nazi occupation of Jersey. If He Breaks Your Heart sees Warmsley get into real emotional turmoil - "if he takes the piss, I will break his face... if he breaks your heart, will I stand a chance?" - as malfunctioning robots register their approval behind. Then again there's I Keep The City Burning, an emotionally charged piano ballad of the type he could do all the time if he wanted and earns him occasional Rufus Wainwright comparisons. They'll be sated by closer Craneflies, a grandstanding piano ballad first half followed by a spectacular piano run (by longtime associate Three Trapped Tigers' Tom Rogerson) and a galloping race to the finish. Warmsley's always been an accomplished offbeat pop writer, it's just now he's having a go at attempting to turn pop mores his way. They won't, but then reaching for something intangible and out of most British singer-songwriter's bounds is what he's so good at.

That, and knowing just who to thank in sleeve note acknowledgements.