Sweeping The Nation Albums Of 2008: Number 6 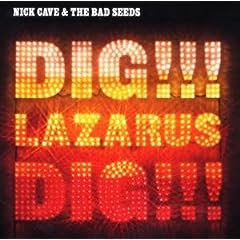 Nick Cave, going on recent footage, has adapted a fantastic new way of playing the keyboards - side on, knees slightly bend, back arched slightly backwards, right hand feeling out the riff, left arm outstretched the other way, the odd hip swivel and half kick. Once seen, air keyboards never envisaged in any other way. Like Korg stance, like music. Cave didn't really have to change, but then a lot of solo elder statesmen have a shot at rejuvenation when their twilight and the onset of comfortability calls, from Dylan's Time Out Of Mind/Love And Theft return to mattering to Bowie's drum and bass dabble to Van Morrison's annual attempts to reconnect with his soul youth. Since settling down and relocating ten years ago Cave has produced some sketchy work - No More Shall We Part's diversion into the piano turned many away, Nocturama was too patchy by common consent, and while there's nothing particularly bad about Abattoir Blues/The Lyre of Orpheus it does go on a little bit, as double albums are wont to do. Last year's Grinderman may have come out of Cave wanting to unlearn everything he's gained about controlled classicism and return to the Birthday Party's convulsions, albeit with more humour, more self-awareness and less shooting up, but something in him seems to have stirred. Fourteen Bad Seeds albums in, on Dig, Lazarus, Dig!!! Warren Ellis was guided away from violin and towards many strange boxes and plugged in things, and the spirit meshing the record together was not that of the religiously quoting humanitarian balladeer but the full on sophisticated garage rock violence/r'n'r preacher mode - Tupelo, I Had A Dream Joe, Do You Love Me? And they sound like they're having fun. You wonder what Blixa Bargeld, who according to one source left the Bad Seeds in 2003 because he reckoned they were coming too close to rock music, makes of it all.

If this is a new restart, the title track lays it out beautifully roughly, Velvets very few chord garage circling inwards as a wild-eyed Cave ("I can hear chants and incantations and some guy is mentioning me in his prayers") charts Lazarus attempting to make his way in boho New York City, picturing a nihilistic society favourite who "stockpiled weapons and took pot shots in the air/He feasted on their lovely bodies like a lunatic" before the inevitable fall to prison and grave. "He never asked to be raised up from the tomb!" Cave concludes. Today's Lesson introduces Stooges raw power to sexual desire (and also reintroduces characters from Cave songs past, as does the Odyssey-themed More News From Nowhere, which features a Deanna and - gulp - a Miss Polly), while Albert Goes West crashes through a road movie rockout as Cave observes other people head for New Hampshire, "the vast indifferent deserts of Arizona" and, erm, the weeping forests of le vulva". It's not like they can't do anything else now - see the Swordfishtrombones-esque skeletal clanking loop behind Night Of The Lotus Eaters or the slippery carousel of something or other behind Midnight Man, both suggesting Cave's been taking notes from Christina The Astonishing off Henry's Dream - it's just they feel destined to imbue it all with strange, shock and awe distorted psych-rock. And then there's the monolithic We Call Upon The Author, which in an intense, feedback-punctuated 5:11 questions Cave's own roles as alt-shaman and bookish meaning seeker, invents words ("guruing", "mediocres"), wonders why we still have suffering of all types, promotes John Berryman, runs a dual meaning as to whether 'the author' is himself or God, and features the joyful repeated shout "Prolix! Prolix! Nothing a pair of scissors can't fix!" It passes muster among the very best of his back catalogue. As does the whole glorious mess.