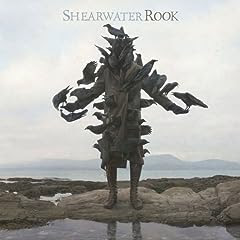 As Okkervil River have become more stingily semi-anthemic over time (and is The Stand-Ins still to come? Well? Is it?) the band Jonathan Meiburg set up initially with Will Sheff for his quieter songs has gone in the other direction, becoming more complex and utalitarian, learning to use the space and in doing so getting nearer to admitted influence Talk Talk in their Spirit Of Eden/Laughing Stock inventing post-rock days. Shearwater are by no means post-rock; though, although the explosions of sound are there they're still mostly about the baroque end of the expansive North American alternative scene. It's not choc-full of immediate pop hits, but if you're willing to put the work in at your end its depth of detail makes it stand in a field of its own.

That Mark Hollis influence is immediately apparent from On The Death Of The Waters, Meiburg's voice soaringly high and expressing every syllable and held note over spare piano until a wall of Kranky/Constellation guitar noise and smashing percussion appears exactly halfway through before disappearing as abruptly as it arrived forty seconds later. It's not so much a song as a statement of intent, Meiburg now with a full band around him demonstrating that they can be as minimal or maximal as they want, they'll still make an impact. It's demonstrated in the way the twinkling glockenspiels and insistent Leviathan, Bound is lifted by strings and defiant cries of "(heart) still is racing!", how Home Life's focus changes, swaying woodwind and swirling pizzicato strings make its seven plus minutes sail by, how The Snow Leopard starts with stately unaccompanied piano and voice again and slowly develops into an enormous crashing crescendo. Rooks is what passes here for a commercial track, progressing at an orderly pace with a trumpet solo midway through and almost swinging for a song about the slow destruction of the natural world. Similarly, Century Eyes is the shot at a big rock number but remains far too careful and mannered to properly carry out its threat to turn into The National, not least because it appears to be about how we as a species were not first to the earth and should not be last if we can at all help it. The Hunter's Star closes the album on a searing grace unbecoming lyrics about "the waves that close on a world that will never return again". Even by the skyscraping attempts of previous album Palo Santo Shearwater have both excelled themselves in and to an extent transcended the world in which their music has placed them. Rook is a collection of songs of beauty and mystery, lament and lambent celebration, grandiose and intense from first to last.