Sweeping The Nation Albums Of 2008: Number 1 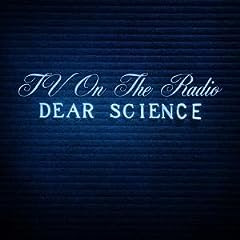 If we're counting personal charts you'll never see, that's three albums, three number ones of the year. What a band. What. A. Band.

But TV On The Radio never feel like the greatest band in the world when they're in absentia. It's as if, once the boundaries and barriers of North American alt-rock-whatever have been redefined they're willing to sit back and watch in case anyone else fancies a go, often without needing to hold their breath. Hell, Dave Sitek often gives them a head start himself and they still trip over their own feet at base camp. From which, eventually they saunter back into the scene and hold everyone else back with their little finger, making it look like this house can be cleared any time they want. Why? Well, although the race card is something they've never really played off the first track on their first album, The Wrong Way, dismissed black Americans' search for strict self definition through stereotype and the music over both Desperate Youth, Bloodthirsty Babes and Return To Cookie Mountain followed suit - avant-garde hip-hop-ish beats, No New York guitar squalls, propulsive rhythms natural and otherwise, and myriad obscure reference points conjoined and blasted until the aural texture alternately resembled both sides of a strip of sandpaper. Nobody sounded like them; nobody sounds like them. Now including, in a sense, TV On The Radio. Oh, Dear Science retained a lot of the above, but there's something more about it this time - more tunes, more hooks, bigger production, all without giving in and getting shot of the visceral soundscapes, Antibalas horn squawks and odd whirring noises. It's TV On The Radio's most approachable work to date, but that needn't necessarily mean selling out to The Man commercially or blanding out once the ideas are pared down. And that's just the music. Lyrically it's very much an album that could have been made and released when it was, that is to say at the end of an eight year term by a hardline right-wing president bearing a scorched earth policy towards everyone else. Music for head, heart and feet in perfect synthesis.

Going back to that The Wrong Way reference, it seems the prime introduction this time around has been a slew of black music milestones to file next to Miles Davis-like constructions - Afrobeat syncopation, the social critiques of What's Going On, the taking up of arms of Sly and the Family Stone's Stand!, the 22nd century funk mania of Prince and Parliament albeit without the longeurs, even a snatch of mutant disco. Things you won't hear so much of here: the demonic barbershop harmonies, Kyp Malone's highest falsetto, appropriation of Thurston Moore and Steve Shelley's pedals. Which is not to say they're not required on voyage, as Halfway Home initially beds down on arrythmic handclaps and panning drums, tone generator bass and layered Tunde Adebimpe ba-ba-bas that sound anything but sunny. When it steps up a gear and brings in the synths over the top it's like My Bloody Valentine are playing next door to Sitek's back roads studio, Adebimpe stepping up into cracked falsetto. It sets a tone for the songs ahead, a space-art-rock where the guitars have turned off the afterburners but left the jet propulsion effects, while Adebimpe is stalked by a darkness. By the end you can't quite tell if this is Kraftwerk or Eno/Fripp or some mutant Euro-electro thing or what, then you realise it's basically all the same in TVOTR's mind. That darkness is almost definitely one informed by the decision to hold a party at the end of the world - Crying is a stuttering Lovesexy-era Prince take that swings like a soul funk-out until you realise it's essentially a call for the world to self-destruct and start again. Golden Age mixes and matches soul of all shapes - David Bowie plastic, Off The Wall futuristic, Funkadelic histrionic - within machine tooled grooves as it prothyletises on some sort of new day rising, and while Red Dress starts with the no uncertain terms "hey jackboot, fuck your war!" it then forgets the contemporary point scoring, instead picking on the apathetic that leads to the donner of said dress becoming "the Whore of Babylon", their own take-no-prisoners policy laid out. Adebimpe is virtually on the warpath for every man for himself by Dancing Choose, firing off rap speed streams of conscious on materialism and the Me generation, an "angry young mannequin, American apparently" and whatever a "foam injected Axl Rose" is supposed to be. Axl Rose, perhaps. But it doesn't come across as having contempt for the listener, more cajoling them into helping the active out of this mess.

What they've also learnt for this time around is to slow things down. Strings on a TV On The Radio record ought to be unthinkably gauche, but Stork & Owl's elegy for internal peace plays them in over distortion to great effect, on Love Dog they almost help make sense of the love theme behind its uncertain, uncomfortable churn against glitchy beats, while Family Tree is a power ballad of a peculiar stripe, ushered in by Eno-esque reverbed piano and just subtly building and building, Adebimpe sounding disturbingly like Kele Okereke as he sings about forbidden love and the willingness to escape the family unit set against reality. Closer Lover's Day isn't a ballad but a big marching band production number, Antibalas fanfaring somewhere out the back as Adebimpe and regular guest Katrina Ford get into great detail in the name of sex. "I'm gonna take you, I'm gonna shake you, I'm gonna make you cum" might be worth a shot next time you're out pulling, but don't blame us or Malone for any unintended immediate consequences. Still, at least they've found something to take their mind off things having just spent DLZ shouting down the world's powers. See, TV On The Radio don't claim to have all the answers, but they're going to make the questions more intangible instead. The album is influenced by Prince, but while his Sign O' The Times took a snapshot of place and time this is more a negative, undermining the noise and confusion, running on fear and worry. And that, essentially, is why TV On The Radio, armageddon's party jam planners, are so unique for this moment, heavy but approachable, taking melodies and twisting them into Mobius strips. They do this because they can, and because they think they might be the only ones who do.

I remain convinced that there are subliminal messages contained in the work of TV On The Radio that say something along the lines of "hey there handsome, yes, you with the internet page about music, why, you're lovely, I bet you're a big hit with all the ladies, or the gents if that's what you prefer, oh, mmmm", or something like that anyway.

Simon excellent stuff as usual, some fine writing and some fine choices, with a few for me to go off and discover as well.

Have never really ‘got’ TV on the Radio myself but will give them another go.

Trying to come up with a similar list myself (without your self-imposed restrictions) I got to;

Need to listen to Indelicates, Fall and Lodger a bit more.

I’ve seen a fair bit of criticism for HONY, especially around the production, but it sounds great to me and just think the songs are more catchy than those on WABWAD.

Hell yes and amen to all of this. Did you manage to catch them on their recent UK tour? The Birmingham gig at the very end of it was INCREDIBLE.