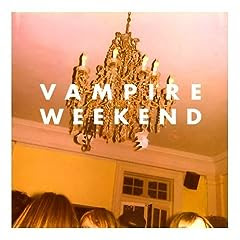 Vampire Weekend are prime placed for the hipster backlash, but you and they probably knew that was coming. The deliberately Ivy League style, Columbia University background, appropriations of Afrobeat (side note: a Columbia University radio show is credited with heightening the US profile of African music - see Dirty Projectors and Yeasayer, also from New York)... it's not going to mean a hill of beans to your rock'n'roll kid. Thing is, they know this. Check their stagewear, the yacht they slouch around on in the Mansard Roof video, the invocation of a Mansarf Roof itself, the song apparently about a sodding Oxford comma... Hell, it's all in Cape Cod Kwassa Kwassa, the song here most explicitly derived from west African style via middle class kid orthodoxy, Koenig weaving in alongside the Louis Vuitton namecheck to United Colours Of Benetton and how "this feels so unnatural, Peter Gabriel too" cutting cultural tourism allegations off at the pass by laying it on a plate for them.

So let's leave what it all means to Sasha Frere Jones and talk music instead. It's an intriguing mix of cheap sounding keyboards, economical martial drumming, clean Afro-guitar stabs and Ezra Koenig's way of dropping in offbeat references and lyrical structures, Oxford Comma prominently namechecking Dharamsala and crunk pioneer Lil Jon. A-Punk is taut Talking Heads with a Mellotron, M79 a Brooklyn Magazine meeting The Left Banke with added harpsichord (!) and jaunty strings apparently playing the Ski Sunday theme in double time, Campus a tale of uni grounds stalking that sounds like the Strokes with all the fuzz and attitude excavated until only the cadaver remains, transplanted into Walcott where as Koening suggests the titular subject "get out of Cape Cod tonight" amid sawing cellos Rostam Batmanglij apparently attempts to recreate that guitar sound on analogue synth while submerged underwater. And while One (Blake's Got A New Face) really chances it with Koenig taking on a Sting accent amid references to Darjeeling, 'occident', 'Spanish brownstone', 'cryptographs' and the concept of being "dowdy in sweatshirts - absolute horror!", it comes in a package that can never quite decide which instrument should be more minimally percussive and contains a call and response section. Strip away appropriations and it's a very odd album, and a very intriguing one.

I knew I recognised that strings bit from somewhere!