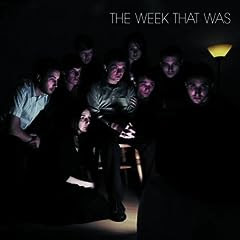 Someone, probably us, once said of Field Music that they sounded like every era of XTC being played at the same time, so many ideas did the Brewises and Andrew Moore utilise. When the band were put on hold last April it stood to reason that anything they did to follow their individual artistic visions would be worth following, and while David's School Of Language's Ship To Shore ended up flattering to deceive, Peter's take for The Week That Was was somewhat more high risk, an album inspired equally by Paul Auster's absurdist crime fiction, a week without broadcast technology to hand and 1980s recording technology. Many bad things came out of 2008's obsession with 1980s recording technology, but naturally an architect of precision such as Brewis would choose inventively - Peter Gabriel, Scary Monsters Bowie and Japan rather than, say, Fleetwood Mac. If idiots want to go "like Phil Collins drums!!!!11", let them. Phil Collins was, after all, a good enough drummer for Brian Eno, Robert Fripp and John Cale.

The result is a suite of eight songs, totalling 32 minutes, that would be called progressive if they were ever allowed to stretch out to their full length but instead get shoehorned into a very peculiar, dark and oddly structured (The Good Life is 45 seconds old when it finds itself in the midst of a vibraphone solo) form of pop that owes as much to Roxy Music and Eno's first four solo albums as those Linn drum believers, kind of a progressive step both on and back from the two proper Field Music albums. Learn To Learn starts with toppling drums and guitar stabs before blossoming into a slowly crystallising agitated treatise, It's All Gone Quiet breaks out the synths and electronic percussion to create a claustrophobic atmosphere a la David Sylvian and Ryuichi Sakamoto's work together, Yesterday's Paper tells a crime story of its own in microcosm across several subtly shifting sections without nearly going overboard, while The Airport Line is a delicate slice of travel-based wistfulness with a mood enhancing string section. Scratch The Surface's first person criminal taunting narrative closes much as the rest of the album has gone - elliptical, curious, reaching far and taking the right influences the right way where others are desperate to head in the opposite direction.