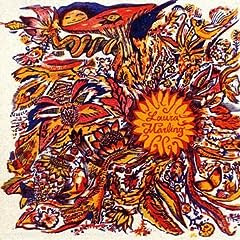 Laura Marling, contrary to hints in much of her press, is not only good because she's eighteen years old, impressive though that is, and it's certainly not the early glib suggestions of another Lily/Kate/Amy/Adele. In fact, the reason why Alas I Cannot Swim overcomes folk scenester baiting is that it sounds so out of place with everything around it in the young British female singer-songwriter division. Take out the Rakes and Noah And The Whale associations and we might as well be covering a contemporary of Eliza Carthy or Kathryn Williams who's chosen not to draw on the traditional myth and legend material, such a richness and lightness of touch is exhibited both in Charlie Fink's production and her own grounded writing. Obviously Joni Mitchell and Carole King figure highly as they would do, but there's something that's uniquely of her own in this place and time.

Such is clear from the start, Ghosts a deceptively almost jaunty arrangement over which a clear voiced Marling suggests fragility inherent in the story of chancing across a man who "went crazy at 19, said he lost all his self-esteem" over "the ghost that broke my heart before I met you" before cautioning "do not fall to your knees each night/Like I believe in everlasting love". Marling isn't a cheery soul at heart on this evidence - "on your word I gave up my whole life for you" declares the otherwise upbeat Cross Your Fingers - but that it's a misleadingly allurring song followed by 76 second 'interlude' Crawled Out Of The Sea, starting acapella and ending in a sea shanty tango arrangement, demonstrates how well she's able to push her range. Elsewhere the likes of Failure, about a failing musician ("he lost poetic ethic and his songs, they were pathetic") and Old Stone betray a Will Oldham influence in their sparseness and directness, while the romantic confusion of My Manic And I, in which the subject "wants to die in a lake in Geneva...the beauty of his death will carry on" but gets dumped by the narrator, who explains "I find it dull when my heart meets my mind", suggests Kristen Hersh. Night Terror exhibits a certain kind of love paranoia, starting "I woke up and he was screaming, I left him dreaming" but promising "if they want you, well, then they're gonna have to fight me". Never mind the birth year, Marling's is a young body concealing an old, weathered brain and heart, and much as as long as nobody tries to exert more commercial pressures upon her where she goes from here will be fascinating she sounds fully developed already.