Sweeping The Nation Albums Of 2008: Number 3 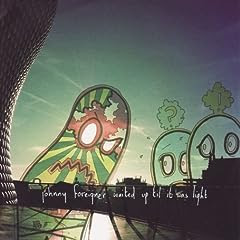 You didn't think this level of frantic kineticism was possible from a British band. We've had wave after wave, scene after scene of smart, full throttle acidic racket from America over the course of this decade, but to get something so life-affirmingly full-on from over here, without concessions to Whileycore... well, it proves that now the underground is mainstream the underground underground has had to buck its ideas up. A lot of reviewers made quick and easy comparisons to Los Campesinos! when detailing Waited Up 'Til It Was Light - the namechecks for a certain breed of 90s guitar band, the tunnel vision towards the finish using the most circuituitous route possible, the male-female shrieking vocal interchanges. But there's far more to Johnny Foreigner than that. Their overload is one of a barely controlled hysteria, sucrose rush replacing the sugar, technical witchcraft you're not supposed to be recognising. Pop hooks run headlong into guitar pyrotechnics, synths and electronic drum beats appear where least expected and Alexei Berrow somehow makes it from line to line without asphyxiating due to the number of words he attempts to cram into each compressed passage. It's almost as if writing about it defeats the purpose, that being to let it slam you into the middle of next week, leaving cryptic notes explaining what just happened for when you come back round.

And it takes six seconds or so to get there, Lea Room fake starting with a keyboard refrain and then blam, Berrow hits the switch and blasts a wall of jolting guitar at us with what seems to be three riffs at once, jolting and diving amid ambiguous statements ("they'll write your name with sparklers if they write your name at all") towards the culminative "get off before the ship goes down". It's named after their tech. Well, of course it is. From then on... well, not so much a constant feast of discordance, but certainly one that knows what it's doing with it. Eyes Wide Terrified works not so much because of its quiet-loud barrages but because of the "your life is a song, but not this one" breakdown, not to mention the actually quite affecting line "he falls asleep on her shoulder every shift they spend together, which is most nights". Yes! You Talk Too Fast is as if emo, the Dismemberment Plan mid-90s version, had evolved properly. Cranes And Cranes And Cranes And Cranes is, frankly, a song about how rubbish Birmingham's nightlife is ("why'd you want to live here if there's nothing but housing?"), yet it explodes like Cap'n Jazz gone nuclear, opens with the statement "we make our own mythologies" - books have been written on lesser principles - and threatens to messily explode in its own soaring peaks, and actually does at the end. And it's got handclaps on. The slow acoustic one even works - DJs Get Doubts is also about Birmingham nightlife and starts "some say Shaun Walsh saved our city to a certain extent", perhaps even too specific for purpose, but drifts along on keening violin and backing coos. And what about us? The End And Everything After's lightning drum rolls and Morse code verse structure only partially mask a treatise on band obsession ("you don't stop believing in the band/Just cos the band stopped believing in the band") and what we, the consumer, think of they, the performer. "I know that I'm good and I know that I'm close/But god knows what you think of us". Yeah, that's about it. Henning's Favourite considers the hipster: "I thought that wars were fought for this... At least you know where you stand/So you raise your middle finger to the garage rock... How your girlfriend is convinced but you are not/Until the garage rock assimilates", until disappearing in a welter of delayed tapping. But really it's all about the little moments as much as the big show offy bits. Salt Peppa And Spinderella, for example, which continues on its own drum machine-aided way until Alexei embarks on a confusingly quick monologue, at the end of which he suggests "bring out the real fun, turn on the real drums". Junior Laidley does. The whole thing summarily goes thermonuclear. Or Sometimes In The Bullring, either the lyric "I will wait for you outside car parks, outside busy shopping centres/I will wait for you at work when all your early shifts run late" or the bit at 1:10 when all three divebomb at top speed. And that's the size of it - inventive even in its limited scope field, lyrically hitting home and almost unbearably exciting.


THE HIDDEN LINK AT THE END OF THE REVIEW: remix four JoFo live videos, somehow, on Popmorphic. Or just keep the levels as they are and hear two new songs. Or do Dananananaykroyd instead.