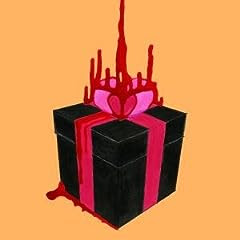 It's been quite a year for guitar-drum duos, from No Age to Slow Club to, ahem, the Ting Tings, but on their debut Blood Red Shoes often feel like something else entirely. Maybe it's because of the sound of Laura-Mary Carter's guitar, hugely revved up and spitting as viciously as her insolently acid tongue. Maybe it's the fact that the drummer tends to be fairly anodyne in such set-ups so Steven Ansell's whirlwind flurries were something else entirely. Or maybe that there is nothing else here - guitar lines to land a light aircraft on, hammering drums, two vocalists swapping lead/backup/harmony roles song by song, rough as you like. If anything, putting them in a studio defeats the purpose. (Especially if producer Mike Crossey is going to add distracting levels of echo to the vocals. Still, BRS continue to go out shred faces to this day while Crossey was deployed to work with Razorlight and Joe Lean & The Jing Jang Jong, so we know who the winners were there.)

So where does it fit in? Doesn't Matter Much hinges on a big old grungey riff, but they're not Nirvana/Sub Pop slackers. It's Getting Boring By The Sea is a feast of stop-start delay pedal and a whole load of hi-hat as if set square for the indie disco floor, but they aren't post-punkers. ADHD charges shoutily headlong at commitment's brick wall, but they aren't Huggy Bear turned up and halved. Actually, they're all of these things and more, often within the space of three and a half minutes. Try Harder punctuates wordless coos, handclaps and clanging Fugazi-ish guitar hits before Ansell howls at the moon. I Wish I Was Someone Better travels so fast and with so much jet propulsion that it'd leave Richard Noble and Thrust 2 feeling inadequate as Ansell's drumming hits warp speed as he pleads "what should I do when I'm the one to blame?" (He pulls this off with unerring accuracy live too. Faster and harder, if anything. He is not human, we're telling you.) Pissed off and taking it out on you, Blood Red Shoes are blood red raw, and that's all they or you need.

It's Getting Boring By The Sea (single version)

Much as I like Blood Red Shoes, I thought this album suffered for not really offering enough variation on their formula, i.e loud guitars, crazed drumming, harmonised vocals.