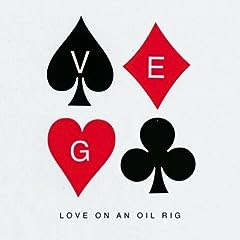 The Victorian English Gentlemens Club’s first album was, for all its angular excitement (top 20 in our 2006 list), a little too much in thrall to its influences. Most obviously the Pixies in its dynamic malevolence, roughed up surf guitar and male-female vocal interplay, but its sound ran the gamut of post-punk - not the Gang Of Four post-punk of its contemporaries, but the variously unorthodox twisted approaches of The Fall and Wire among others. After label and personnel changes this second album has found a way to both refine and integrate thouse touchstones into something more definitively their own.

What it certainly isn’t is a record with an eye on Greg James' playlist. It’s apparent that there’s something fundamentally creepy and almost mechanical about TVEGC, albeit mechanical in the sense of W. Heath Robinson cartoons, thriving on cyclical construction. Watching The Burglars won’t sit still for a moment, boasting a runaway rhythm - lots of that on this album, see also Bored In Belgium - and terse, semi-cryptic staccato exclamations around an oddly earworming chorus. It may be modern indie’s first song to remind at least this listener of Bow Wow Wow and mean it as a complement. And that’s their idea of a single. Parrot clanks around much like Wire’s underrated mid-80s work, harbouring Adam Taylor’s desperation that the titular bird “hasn’t said a word for the past few days” before launching into a distorted bassline and wordless chorus decorated by slashing riffs. Women Versus Children pitches feedback and Taylor’s on-edge vocal against a falsetto loop of “knives and swimming pools and that” ahead of a crashing power chord aided chorus. While occasionally you can still tell what they’ve been listening to – Worker and I Say What I see both have the distorted tension build and desperate shouts of Pere Ubu – there’s no underlying thread this time that connects the lot to one specific influence other than the unashamedly odd and obtuse. The band are art schoolers and proud of it. Lyrically there's still messages you have to concentrate on to make sense of, but there's a definite undercurrent of psychosexual tension, most evident where Driver’s Companion tackles sexual inadequacy among long distance HGV drivers and when Mason declares she’ll “lie on the floor moving along on the ground, waiting for you like a dog” (Dog). Here, all put together, is final confirmation of a band whose idea of post-punk influences understands what the term was actually aimed at, learning something from the blood and thunder and adapting it towards its own eccentric means.