Sweeping The Nation Albums Of 2009: Number 9 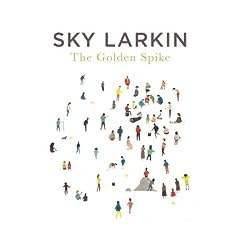 Already sounding ready to process fully on demo, Sky Larkin took a good long while from formation to album release. Mostly this was so members could complete further education courses, but it also allowed them to hone a sound and approach that comes across on The Golden Spike not so much as a power trio punch in the gut but death by a thousand tiny arrow spikes of jagged melodic subterfuge. Several reviewers attempted to draw comparisons between The Golden Spike and Sleeper, and while you can kind of see why - power indie-pop, female vocals that aren't especially ballsy nor girly-girl - it doesn't behove any of us to think that's anywhere near what there is here. Like their Awesome Pals! comrades theirs is a very American slanted sound, their idea of hands across the ocean being towards the female-fronted college rock spiky confidence of a Throwing Muses, Sleater-Kinney, Belly or Breeders. Then again, wherever the influences come from, it still seems cause for celebration that Britain comes out with a band who tread as far from the stock arrogance setting of the last fifteen years yet retain the tunnel vision to know that this is the right way of doing things, short, sharp electric shocks of sugar rush power trio alt-rock with quirks, twists and no small amount of charm.

By the end of 2006 UK bloggers were voting the best band in the whole of the land. That's some promise to fulfil, but it's clear they can handle it from when opener Fossil, I constantly builds, peaks and rushes, Katie Harkin's vocal engaging in its own forthright but warm, not quite sweet but getting there (or more likely getting away from there) way. Being from Leeds it's tempting to try and make connections with the city's post-punk trinity Gang Of Four, Delta 5 and Girls At Our Best, especially as two were also led by women, and while that's more luck of location than musical judgement you can hear a certain propulsion throughout. Check the insistent bass on Pica, Molten's stop-start tautness and vaulting riffs, the way Harkin seems to be trying to fight the natural direction of the rhythm section in both vocal and insistent guitar before the excellently sibilant chorus "sentiment stretched over sediment and soil", Nestor Matthews' flailingly precise drumming throughout but particularly on the chimingly forceful Octopus 08. John Goodmanson's production roughs things up to some extent, his influence betraying a high tension wiriness, but with the likes of darkly lyrical "gonna put you in bottles and jars and keep the bigger bits in the boot of the car") Korg rollercoaster Keepsakes, Summit's wind tunnel guitars and general sense of purpose and the plain skyscraping Somersault it was a compositional quirk that was there all along, just now with more defined guitar tones. It doesn't sound like an album with ambition towards radio friendly arena ticket shifting, which somewhere along the line became a stock criticism but here stands for something almost more personal, with no thought to massive choruses where something more insidious will do. What The Golden Spike achieves is taking the root blocks of some slightly out of fashion influences and sharpening them up for something that stands out in its own realm.