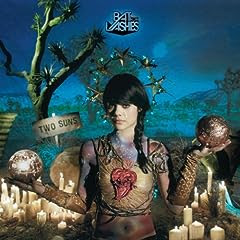 Bat For Lashes' debut Fur And Gold made everyone's end of year list except ours, and that's because we hadn't heard it by then. While suspicion about those who flaunt bohemian backgrounds (in fairness, "former nursery school teacher from Rickmansworth" wouldn't have been a malleable selling point) mixed with her lost-in-the-dreamland-woods approach was leavened by the imaginative flair of what she was up to. It was natural to feel a little deflated, then, when the first two singles sounded like Fleetwood Mac.

In truth, Daniel might sound like Rhiannon but only while being taken down noctural woodlands in an ex-boyfriend's car. Elsewhere it still sounds like gothic music - not big-G Gothic but Wicker Man pagan poetry with an autoharp. Much as it was played up you don't need to know about Khan's femme fatale alter ego Pearl, because it just helps Khan get all the better lines. Opener Glass picks up exactly where Fur And Gold needed to lead us, with an unspooling rhythmic cross-threaded beat, Khan all over her register and a real sense of air in the production the better to sound like voodoo pastoralism. It's the sense of David Kosten's layered production spareness that helps the album work so well. Sleep Alone suggests Goldfrapp's recent retreat from full-on dance to woody folkisms but also reflects that warmer live presence through an insistent beat. The horribly yearning, spare piano lament Moon And Moon makes itself the emotional centrepiece, while final track The Big Sleep, as its synths arpeggio and piano glistens, borrows from Kate Bush as Khan makes allusions to the end of a show, calling and responding with Scott Walker - SCOTT BLOODY WALKER - to leave all bodily hairs standing to attention. Pearl meanwhile gets ready for her big nights with some PJ Harvey: Peace Of Mind is reminiscent of White Chalk, almost Victoriana in its arrangement simplicity, while Siren Song is a spectral To Bring You My Love until an absolute flurry of drums decides to wage war on the staccato piano and vocal yearnings. Already making bold steps two albums in without faltering, Khan seems properly artistically solid well beyond headband based fashonista.

I followed her from first seeing her fourth on a My Latest Novel bill in early 2006, but didn't have Fur and Gold on my list either because it was a bit disappointing.

This hangs together, doesn't have anything as shapeless as Seal Jubilee and is better all round though.