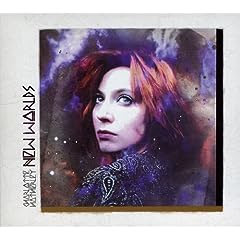 Thinking about it, the third album was most likely to be the one where Charlotte Hatherley blossomed into her own milieu. If Grey Will Fade was her marking a path outside of Ash's then straight-up FM rock direction by the power of power pop and The Deep Blue her way of finding her own off-kilter feet, New Worlds finds Hatherley plotting a course between career paths. For the first time at least consistently there's a confidence in these songs that she can pull off a full set of frazzled art-pop songs that pull the rug from under themselves, balancing the hooks with the slightly more experimental.

Hatherley has long had her admirers, not least for her adaptable, sparky guitar playing (she's sidewomanned for Bat For Lashes and Bryan Ferry since The Deep Blue), but she's not always been able to construct her lively songs in a way that flows elegantly, or otherwise, through 40 minutes or whatever. Where some of the album - Full Circle, Little Sahara, the title track - goes back to the first album's bubblegum with an edge she's learnt from working with Andy Partridge about leading punk-pop melodies down less than obvious paths, pulling things apart whether through stop-start fuzzy basslines or crackling solos. More out of the way is White, aided by a prowling bass, glam beat references, a rare vocal seductiveness and lyrical playing with the idea of colours in a white world as a metaphor (the colours motif seems to run through most of the album). Alexander begins with pretty acoustic guitar and promises to a prospective love which flits into a forceful chorus or two and dips every so often into big college rock power chords, while closer Wrong Notes belies its initial intentions as a mid-paced chugger about music making as metaphor for the lovelorn by sending the whole song into a hall of mirrors, reflecting and refracting the basic song all around itself before the guitar goes all Mick Ronson. Firebird, meanwhile, goes all Weimar/music hall cabaret. Hatherley, you may know, is on her own label, and presumably this is what creative freedom does. It also allows her to experiment and work through towards what she's good at, which here is revealed as nothing more complicated than a fresh, fun and increasingly technically adept recording artist.