Sweeping The Nation Albums Of 2009: Number 7 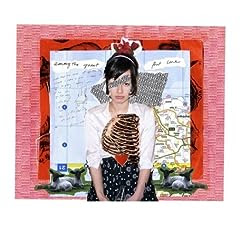 Emmy The Great took her time in getting here. First Love was released nearly three years after her debut 7", a time when Laura Marling had just made her live debut and Kate Nash was about to book her first open mike. As all sorts of fellow UK alt-folk community members - Noah And The Whale, Lightspeed Champion, Jeremy Warmsley - raced past her she bided her time, found willing co-creatives (Euan Hinshelwood and Tom Rogerson essentially became two thirds of the Emmy The Great collective name) and released a set of songs beefed up from her extensive demo collection. In that time Emma-Lee Moss developed past the diary entries-to-folk songwriter cliche so she could produce something like MIA, a spare lament to a lover killed in a car crash (“suddenly there’s one where there used to be two”) with Moss trapped in the passenger seat considering the mixtape still playing.

Not that that means she’s abandoned the even greater songwriter cliche, affairs of the heart. Fate landed another cosmic joke as the title track referred to emotions of a past love evoked by hearing “Hallelujah, the original Leonard Cohen version”, released just as Alexandra Burke took the song as her own, but it finds itself caught between the joy of a new affair and how it seems to have ended badly, at the culmination of which Moss admits “I wish that I’d never come/But now that I have, I would do it again/I would forget that I’d piss on a grave”. Come again? The girl group-ish sway of We Almost Had A Baby plays the twinkling and backing harmonic coos off against the sour lyrics in which Moss wishes the (real life, and very specifically referred to) ex who helped turn her from girl to woman had impregnated her so she had something to permanently attach herself to him and “I’ll let you know if you have to come and choose a name”, not so much self-pitying as over-assertive. Her rare ability is to connect raw emotions with a fleshed out narrative, taking small details in the great scheme of things and magnifying them to show where they fit in. Absentee starting the album at a family gathering observing the way people around us change and City Song ends it as the protagonist “took the road down to the city as it called”. In Dylan she feels obliged to prove her cultural awareness and empathy to a disbelieving male; in 24 she critiques men who let the world slip them by while esconsed in their own world by comparison to Jack Bauer. The intimate On The Museum Island tells of fleeing to Berlin with a close friend as escape after the high profile death of her famous father, affectionately pitched and winningly summing up her new predicament with the assertion “you’d taken your last ever bus”. There are intriguing liturgial references - Kyrie Eleison in Absentee, “Gloria in excelsis Deo” in The Easter Parade, Bad Things Coming, We Are Safe rhetorically asking a third party “are there restaurants on Jericho?” Produced by the band and released on Moss' own label, taken as narrative First Love is a semi-cathartic mess of an album on an emotional level, one which catches itself up in its own mass of contradictions and whirl of changing lives, not necessarily ultimately for better or worse. Moss is teaching herself to treat the two imposters of success and disappointment the same and coming out the other side better if not necessarily wiser for her experiences, leavened with the stark humour necessary for someone who puts herself on the line time and again.