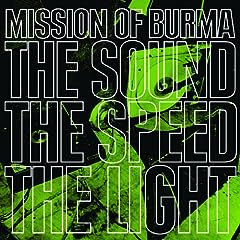 Three decades into a career of no little backstory and cult acclaim, albeit with a sixteen year gap in the middle, Mission Of Burma have now not only made three times as many full lengths as they did first time around but maintain their visceral, hard drilled post-hardcore (backdated to pre-hardcore) remains as urgent and vital as when they emerged with the Signals, Calls And Marches EP in 1981. And while they may not be the standalone innovators or to an extent the jittery iconoclasts of their younger days, all three of their post-reformation albums have dug new ground for pummelling.

Right off the bat, 1, 2, 3, Partyy! crashes in and coasts on a Husker Du parabola while mocking the drinking to excess lifestyle, followed by Possession, a typically unorthodox Roger Miller song on which his guitar stutters and snaps over itself like Andy Gill's does on Entertainment! just so it can derail an otherwise harmonious, almost dreamy chorus. SSL 83 sounds like the Minutemen at their most approachable falling downstairs, the recording of which is then played backwards, and with its locked groove-of-sorts seems to pick up right where Vs left off. Almost ballad pace they may be, but Forget Yourself is propelled by springy bass and Miller barking acute lyrical orders, while Feed takes one look at the idea of a lighters aloft anthem and sends in a load of self-examination, Clint Conley's vocal raging against the dying of the light, like they need to when immediately before it So Fuck It has been the closest they'll come to Dead Kennedys careering snottiness. Even the lesser songs snap with a muscular power, but while the pace feels of a singular piece it doesn't feel like a repetitive album. And this is, we reckon, the weakest of their three Noughties albums. Indeed, as Slow Faucet crashes into a whirlpool of cymbals and crossthreaded vocals it doesn't even feel like the 'getting their dues' excuse applies as far as Mission Of Burma's exhumation goes - they continue because they're having far too much serious fun to stop again now.

I agree entirely... though I prefer it to The Obliterati, so far. Surely the best example of a band unaffected by the passing years. Best yelps of the year, anyway.