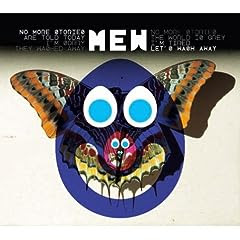 Oh, Mew, what are we going to do with you? A 23 word album title with a nightmare cartoon of a cover, they aren't a band to make things easy for themselves, especially when the first track turns out to be largely played backwards (apparently it's a completely different song if you likewise play it backwards) At least they've never been a band lacking in ambition, Frengers now looking like less a quick course to an international audience than the point at which their vaguely crossover ambitions could be dropped off before being comprehensively muddied up.

Or are they? Introducing Palace Players, for instance, for all its arrythmic drumming and prog-flavoured time changes, also harbours a bouncy, insistent riff and, when Jonas Bjerre finally cranks up the falsetto around two minutes in, a pleasantly declamatory joy. Beach may sound like when Dinosaur Jr attempted to go summer pop but it's Hawaii that actually sounds more the beach party with shimmering sonics, Caribbean percussion and a central corkscrewing riff which dives back into the wonderment of walls of reverbing guitars. Silas The Magic Car is a sumptuous semi-ballad like Frengers' 156 shorn of its tremelo, while Vaccine is backed by gamelan touches as it swoops around, attempting to marry big direct guitars with endless drive and insistent keyboards and drums. Cartoons And Macrame Wounds metamorphosises across a vibrating undertow, a slow shoegazey march via Flaming Lips cracked swaying. Mind you, Sometimes Life Isn't Easy is all over the place even by Mew's standads. It's like Grizzly Bear in a nightmare, filled with sonic washes, disappearing into tunnels and returning as an almost standard handclap and piano backed verse with cameos by clarinet and choir. Obviously being Mew most of the lyrics still don't make a great deal of straightforward sense, but big lyrical thinking would just end up yet another insolvable knot in their ongoing joyful mystery.