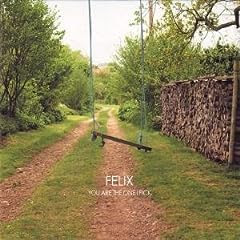 As far as we can tell, for the only time in this whole countdown, Felix have no Spotify or YouTube presence. Annoying, but also fitting, as the music made by the duo of Chris Summerlin (Lords) and Lucinda Chua (live Stars Of The Lid, photos of Charlie Brooker) comes across as very mysterious and hazy, almost drifting above and beyond. There's not that much weight to it - Chua's vocals are ethereal, breathy, the nearest comparative point being Chan Marshall, backed by vibrating textured guitars, piano, lush strings and occasional bits of drumming. You'd be doing well to find anything that sounds much like this.

A lot of the time you'd be doing well to find anyone who delivers their lyrics in the same way as Chua does. Death To Everyone But Us is anchored by rushes of seemingly improvised piano and sawing cello, around which Chua issues a stream of conscious around bile towards the subject in common and the rest of the world in particular which can't quite decide whether to ultimately love or hate. The following title track turns the paradox on its head with a surface breezy invitation to join Chua in her "treehouse by the lake" even if the darkening backing music suggests all is not as it seems. See, even when apparently positive things drip with sinister undertones. Ode To The Marlboro Man dips into country rock to tell of escaping home and marrying the titular cough stick mascot, while elsewhere Chua variously desires to be a pony ("I would not let you sit on me"), breaks into an abandoned house and tells of "a secret you keep and it makes me dance". What I Learned From TV is extraordinary, a post-rock drone shapeshifting around minor chords and Hermann strings while Chua waits more than two minutes before appearing with a late night half-whispered list of regrets and hopes about family, ex-lovers, society, carelessness, self-abasement ("if I hadn't cheated or lied to coincide with whatever game I was playing") and, erm, the desire to "hear that guy's voice off Trans World Sport". Pop's inaugral Bruce Hammal reference, there, presumably meant to jarringly wrongfoota and leaven the listener in the middle of this litany of vulnerability. (It works.) It's a record that demands attention, not only for its somnambulent arrangement but for how much work has gone into packing so much methodology into so minimal a production. Curiously beautiful, often unsettling, always highly prized and individual.

Here's a (quite old) Felix vid I took at a Nottingham show a while ago.