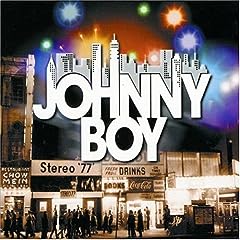 In August 2004 a single eked out on Vertigo Records with little publicity or radio fanfare by a duo from Liverpool, the only real surface USP being James Dean Bradfield co-producing. Against most odds Johnny Boy's You Are The Generation That Bought More Shoes And You Get What You Deserve made number 50, an extraordinary piece of Phil Spector-recalling anti-commoditisation that a good number of bloggers and their readers still go on about to this day, and such luminaries as Johnny Marr and Mick Jones were going on about then. An album was promised. We waited patiently for any sort of follow-up. And waited. The duo were dropped, Vertigo consoling themselves by signing Razorlight and the Killers instead. Reports of Scandinavian and Japanese releases last year surfaced. This year they finally bit the bullet and released it themselves.

Those three years on, You Are The Generation... still stands out as one of the decade's defining pop songs. From the Be My Baby steal through the sweet melody and sour lyrics ("I just can’t help believing, though believing sees me hurt"), the firework effects and wheedling synths and "Adidas sleek mystique reversed", the panning backing vocals and backwards guitars and build and build to "we're all receiving" and the climactic, punching the air "yeah yeah!"s... no, there's nothing on the album to match it, but there's precious little to match it in life. The rest isn't bad, though, or it wouldn't be this high in the list. It's not all like that song either, although it often shares the commitment of its message. It does resemble quite a lot else, though, often played at the same time. Fifteen Minutes takes Motown into its Cubase, adds wodges of go-getting guitar and slimy synths, and straps on a vocal melody redolent of Saturday morning cartoon themes, except this one is asking "tell me what you gonna do", lyrics like Lolly Hayes' voice expressing passion with ice in its veins. Livin' In The City is Big Audio Dynamite on overdrive, hotwired disco redolent of the Big Beat Boutique being steamrollered as Hayes dreams of "sixteen thousand Sony beatboxes tuned into rock and roll". Then there's the anti-consumerism call to arms of War On Want, on which Lolly sounds like Wendy James if she stopped messing about and became really ire-filled, Bonnie Parker's 115th Dream seemingly filching parts of I Want Candy and U2's Desire but then going big beat, new wave, hip hop, country and baggy all at the same time, the fuzzbomb of Formaldehyde (Last Words Of Lottery Loser) and All Exits Final having a go at putting 60s psychedelic pop under heavy bombardment. And to finish, the single that got them signed to a major for that brief, brilliant period, Johnny Boy Theme (of course they have a song with their own name in the title), starting with a Mean Streets sample before piling in with more huge drums, vocal samples, handclaps, bells, loops, girl group melodies, Lolly cooing, foil Davo not cooing, more fireworks, and a sound that sounds full but not overpacked. Stylistically, it's all over the shop. Thematically, it knows exactly what it's doing.

LISTEN ON: Johnny Boy Theme
WATCH ON: You Are The Generation That Bought More Shoes And You Get What You Deserve