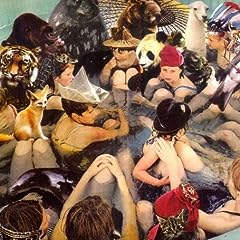 Person Pitch opens with what appears to be the sound of a chain link ferry, overlaid with what sounds like some sort of township ritual of campfire handclaps and 'ah's, over which comes the vocal of Noah Lennox AKA Panda Bear, pitched, multitracked and echoed to sound like the Beach Boys, most likely those of the often regarded as underrated albums that came after Brian Wilson's breakdown. This continues throughout Comfy In Nautica's four minutes, overlaid with occasional effects, found sounds and unidentifiable gurgles, eventually fading into white noise. Is this what you expected an Animal Collective solo project to sound like? Well, yeah, probably, as there's occasionally been a Beach Boysian harmonic element buried somewhere beneath all those layered sounds. It's barely straightforward, either.

Or particularly user friendly, coming in at 45 minutes for seven tracks. That campfire oddness comparison is maintained throughout, Take Pills spending its first half with delicate guitar, tambourine and some sort of industrial noisescape which subsumes it and deposits it seconds later as a classic 1950s teen film beach party singalong, albeit one recorded from under the sea. Bros starts its twelve and a half minutes like Jan & Dean working with a scaled down Wall Of Sound on a convertible road trip song, the usual random effects bursting briefly in, before getting bogged down on a fairground ride and turning with vocal editing into a stripped down version of the parent band without breaking rhythm. That it's followed by I'm Not's Gregorian chant sampling forming a self-sampling ethereal drone, and then Good Girl/Carrots' looped tablas which form heavy avant-garde dub patterns before suddenly becoming the second half of the title's loping, oddly Stone Roses-esque groove before changing again into dub Wilson, seems jarring but is really in keeping with the atmopshere of dislocated laidback sunshine, perhaps indicative more than anything of Lennox's move to Lisbon. The weird ambient of Search For Delicious and closing almost simplicity in context of Ponytail don't add much, but then you couldn't really take away a lot. In a field of people trying too hard it's rare you find an experimental album that's as much aimed for the heart as much as the head and that despite being built out of loops never sounds the same from bar to bar.

LISTEN ON: Comfy In Nautica
WATCH ON: Bros (edit)

Johny Lamb, Thirty Pounds Of Bone: "That's a difficult question....I have been greatly enjoying the Deadutantes and Bad Wizard. Also Freddie Keen and Oscar Kainer. But I love Electric Soft Parade's No Need To Be Downhearted. Also, I Fed Thee Rabbit Water by Birdengine."
Posted by Simon at 12:04 am