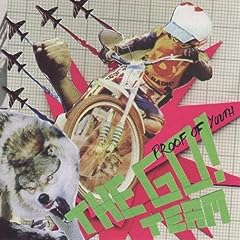 Glancing at a few reviews of the second Go! Team album Proof Of Youth, the two problems most people had with it were either that Ian Parton and co hadn't changed enough from the breakout success of Thunder Lightning Strike or they'd changed the formula too much between albums and Parton getting together a six piece band. The people who wrote the latter pieces appear to be mad, so we'll ignore them, but when the formula is so ridiculously varied and smashed together as that on Thunder Lightning Strike was it's difficult to argue a case that it can be changed that much without upsetting the band's cut and shut DNA. Despite being in the middle of sampling culture's zenith it's too weighted in other influences, it's not too sweet despite the twee touches, but not too hard despite the Sonic Youth influence. And should this sound a bit too Goldilocks, the very joy of the Go! Team equation is that it never really is 'just right'.

Parton famously mastered some of that first album from a C90, and despite the extra personnel and presumably bigger budget there's still a bedroom lo-fi aesthetic at hand - Grip Like A Vice samples raps from a 1984 BBC documentary and plays them over the usual police sirens, stuttering drums, sampled horns and mid-mix overdriven guitars, while My World, a shuffling Wicker Man folky appropriation of Alan Parker's The Free Life which was used on a 1970s ITV schools programme, is built around an sample of same Parton lifted not from some crate-digging library music disc or obscurants' theme tune compilation but from an mp3 he found on TV Cream. Like that first album, most of it will be purloined by TV producers looking for backing music, particularly if there's an instrumental mix of the funfair wall of sound of Doing It Right without Ninja's old school raps and cheerleader chants facing off against Kaori Tsuchida's accented sung hook. Titanic Vandalism envelopes both an excitable Ninja and Marina Ribatski of Bonde do Role in huge drums, surging tremelo guitars, cop and game show themes. Universal Speech features the Rappers Delight Club and the Double Dutch Divas in a good natured fight to the death and makes the listener wonder what did become of the Avalanches, the Divas winning as they get to line the route of Keys To The City towards thrilling blaxploitation horns and another Kaori turn. Fake ID sounds oddly like Deerhoof doing a TV theme and incorporates xylophone, chanting and a mess of distortion. And so it goes on, inviting Chuck D to drive the car chase of Flashlight Fight (and hello again to Parton's harmonica) until Patricia's Moving Picture brings things to a "main points again" sort of drifting off climax. So no, it's not a tremendous advancement from the sound that made them famous, it's just a refinement and taken as an album whole an improvement.

LISTEN ON: Keys To The City
WATCH ON: Doing It Right