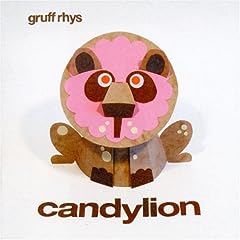 It didn't take two listens to work out what was wrong with the Super Furry Animals' Hey Venus! album round here - it all seemed a bit straight-laced, like they were trying to follow where Juxtaposted With U had gone in keeping their credentials while being heavily played by Radio 2. Where did the excursions with folk and electronics go? Well, for the most part they went into Candylion, Gruff Rhys' first solo album to feature the English language. Maybe there's truth in that, that with special machines and boxes all at his disposal he isn't restrained by what the other four have to be given. What emerges is a set of acoustic psych-pop songs that couldn't really be anyone else but steps simultaneously on and away from SFA's mighty body of work.

The sweet, deceptively simple glockenspiel-led junior Beck title track, perhaps intended as the theme to the children's show featuring the album's origami cover star. The Court Of King Arthur is an acoustic glam stomp about archaeology, Lonesome Words is John Martyn covering John Leyton's Johnny Remember Me, Painting People Blue jazz-acidfolk tropicalia. Con Carino, laced with cheap synth sounds, jingle bells and tannoy effects, is in Patagonian Spanish. Well, of course it would be. Furries producer Gorwel Owen also worked on this album, as did the High Llamas' Sean O'Hagan on string arrangements, and his varied touch is brought to bear as Cycle Of Violence pares down the modern world ("dirty bombs and clean ones look the same if you look closely") in the middle of a circling miasma of whirring keyboards, violins, train track drums and Lisa Jen of 9Bach's backing vocals, followed soon by the back room folk club intimacy of Beacon In The Darkness, even if it does bear a vocal rhythmic resemblance to Golden Retreiver. Gyrru Gyrru Gyrru mostly consists of repetition of the title, which is Welsh for 'driving', important to note as it sounds like a driving song, a metronomic trumpet-laced psychedelic epic in waiting that's perfect for late nights on motorways. We know from trial and error. The real, and literal, showstopper is however Skylon!, all 14 minutes 38 seconds of circular folk modern madrigal, its sprawlingly detailed tale starting as Rhys embarks on a plane journey next to an actress who he claims to "define myself against everything you stand for" and continues through turbulence, a mid-air hijack attempt with a "ticking beer can", an on board bomb disposal expert who transpires to be Rhys himself, romance, the nature of finite celebrity and, after Gruff has wisely given the bulk of the story again in bullet points eleven and a half minutes in, everyone living "unhappily ever after". It's an appropriately offbeat end to a decidedly singular album.

Jeremy Warmsley: Of Montreal - Hissing Fauna, Are You The Destroyer?

David Wingo, Ola Podrida: The National - Boxer
Posted by Simon at 12:02 am