Sweeping The Nation Albums Of 2007: Number 9 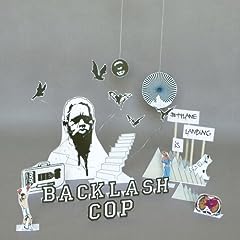 We knew they were committed, but never in this way. On first album Zero For Conduct the Anglo-Irish trio, later quartet, Jetplane Landing were vaguely melodic Pavement-slanted slacker quasi-punks; on second Once Like A Spark they moved into full fledged post-hardcore with leader Andrew Ferris developing a style somewhere where a singing-talking-rapping Venn diagram of vocal style might meet. After a three and a half year gap between albums, during which Ferris worked up his own Smalltown America label, Backlash Cop comes from somewhere else entirely, a genre-leaping concept album about the history of black music through funk, soul, jazz and hip-hop, from the perspective of a tightly wound outfit musically referencing the Minutemen and Fugazi. So far, so Rage Against The Machine (The Beat Surrender's "[it] could earn them some Maroon 5 fans along with the ex-Limp Bizkit ones they could already have" ties with ContactMusic's description of, ironically, Les Savy Fav as "the Kaiser Chiefs with Pistols and Arctics character" as the stupidest sentence written in the name of music reviewing this year), but what sets JPL so far apart from the vast majority of their peers is the sheer excitement, intensity and intelligence on display, not that we'd expect any less of them.

There's even room for a spot of self-mythologising on the title and opening track ("no-one can stop us when we make our own records...fuck them, be radical/I'll get my tit out like Janet if she's not available" Alright, maybe not so much that last bit) after the first of many groove-laden rhythms and coruscating Cahir O’Doherty corkscrew riffs, during which Ferris, in one of the album's many independently quotable lines, sums up what may be the album's aim - "we're all still waiting for punk to mean something/Soulful, uncynical, social, apolitical". The cowbell-friendly White Music and Dizzy Gillespie For President similarly match southern fried funk to explosive riffing, The Lungs Of Punk both namechecks and sounds like the work of the Minutemen's D Boon, and while Why Do They Never Play Les Savy Fav On The Radio? was somewhat pre-empted by this being the year they started playing Les Savy Fav on the radio, "the only punk band left in America"'s earlier punk-funk screes are reflected in light of everything so far for perhaps the album's most directly thrilling moment. For every nod to the Helmet/Q And Not U brigade - see Climbing Up The Face Of Miles Davis, which is about what it says it's about - and by extension the previous albums' highs, there's an out and out experiment refracted through their particular prism, of which the Prince riffage and precise strut of Hendrix Sur La Lune ("let fantastic people be fantastic") is but the tip of the iceberg. Sam Cooke is their version of Motown soul, imagining Nat King Cole visiting Cooke as he lay dying (Cole actually outlived Cooke by a couple of months) as Ferris heralds Cooke's "long black waterfalls of beauty" and rhetorically asks "who's gonna battle with Robert Zimmerman?" The Breaks is split into two, one Pavement with more ire, the second part hardcore Beastie Boys. Us And The Ringside Stars is a monologue about 80s middleweight boxing. Well, naturally. No, clearly not everybody is going to get this album, but as the almost contemplative Song For Sonia Sanchez ponders the nature of how what we've been listening to came together and takes it back round to the apex of the circle ("if we wrote a book of concrete lines, concrete rhymes, maybe songs and then an album that we'd call Backlash Cop...") it can't be denied that at least we have here a band willing to take a chance with progressing their established sound, and when it comes off it's spectacular.

LISTEN ON: The Lungs Of Punk
WATCH ON: No videos or online live footage, but there is an album recording diary which is playlisted on their Myspace

Sounds very interesting. I bought Zero For Conduct after reading good things about it, but it never really grabbed me, I must admit.