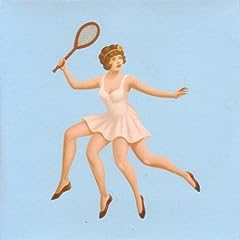 A band is never necessarily dulled because they're adjudged to be moving closer to approachability. The Flaming Lips, for instance, made the best two albums of their careers when they leavened the really weird stuff. While nothing on Blonde Redhead's seventh album 23 will unduly worry the producers of High School Musical, they're no longer the band who produced screes of no wave almost out of spite for the compressed melodies in minute quantities therein, bringing in mixing desk heavyweights, two co-productions by Mitchell Froom and mixing from Alan Moulder. Melding such Billboard-eyeing commissions to their usual angular art-rock shouldn't have been an easy tightrope act, but all that has really come of it is a refinement and sifting of their latterday strengths, the warped tunes, flickering drum patterns, the awkwardly cooing vocals of Kazu Makino and and soundscapes owing plenty to Sonic Youth and shoegazing, just more expressive and focused than their more decodeable previous two albums.

The title track opener points a certain way, as while the abundance of tremelo and cyclical rhythms are purest Kevin Shields Makino takes on a Liz Fraser of the Cocteau Twins or perhaps Bjork on Debut-like mystical quality, hovering over the ethereal mess with her own multi-tracked extemporising. There's almost a hidden simplicity to the album as a whole, with much use of psychedelically tinged loops to embellish fairly simple, clear structures. Silently allows Makino to be more upbeat as the song revels in the warmth of laidback guitars not unlike, oddly, Lush, while Spring And By Summer Fall gradually uncoils to a latter day Radiohead-like rocker (think Optimistic), controlled arpeggios over a bed of uncertain textures, Top Ranking doing much the same but with the guitars mixed down in favour of cyclical drums suggesting Be My Baby and multi-tracked vocals. Publisher suggests Radiohead too, but this time their haunting electronic experiments as pulsing phased drums border advancing guitars and keyboards until Makino's vocals join those of Amadeo Pace and both eventually intertwine and take off just in time for the fade. The overall impression is that while 23 is an album that leaves plenty of room for manoevure when it comes to their next move, this time around they've moved on even from 2004's Misery Is A Butterfly into sonic landscapes that might even suit them better.

LISTEN ON: Spring And By Summer Fall
WATCH ON: 23

Adam Woolway, The Strange Death Of Liberal England: "Bearsuit - OH:IO : an album so schizophrenic and clever it just about doesn't make sense."
Posted by Simon at 12:01 am