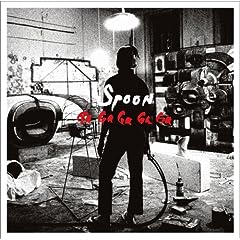 For all their connections with the mid-90s US alt-rock explosion, there's always been a soul bent to mark Spoon out from the pack. Their fifth album, Ga Ga Ga Ga Ga is the moment when Britt Daniel and co seem to have stopped messing about with trying to fit in with Guided By Voices/Afghan Whigs motifs and struck out for their own sound. It may have gone top ten in the Billboard album chart, but this isn't a sound destined to follow the Shins and Modest Mouse to the amphitheatres, pitching itself as being far too awkward and studio bound while retaining its summery pop roots. There's a groove at work that's rarely really exploited in the college radio favourite conglomeration, and when allied to such strong songwriting that occasionally manages to be both melodic and otherwise, often in the same song, it makes its mark all the stronger.

As demonstrated by their evolvement from their straighter early works, Daniel is not a writer prone to sticking to what he already knows works. The Ghost Of You Lingers owes more to Philip Glass minimalism than their Anti Records labelmates and stylistic bretheren, as reverb-heavy clashing vocals and backing wails are overlaid with an insistent programmed electric keyboard, a brave decision to take for track two between the dark Kinksian opener Don't Make Me A Target and the slightly diluted Motown horns plus vibraphone of You Got Yr Cherry Bomb. Whatever shifts they do instil add light and shade rather than ruin the flow; My Little Japanese Cigarette Case is a cocksure strut, classic Spoon in a way, coloured by harp and Spanish guitar breaks and revving synths before falling apart without warning, while The Underdog a call to arms for the radio disenfranchised that, produced by Jon Brion (Kanye West, Fiona Apple, Aimee Mann, reportedly Dido) and featuring a joyous horn fanfare, sounds like something that could litter even American rock radio. The semi-acoustic heartfelt closer Black Like Me, Daniel vocally desolate ("I'm in need of someone to take care of me tonight") over Sgt Pepper strings, proves in finality that Spoon are that rarity, a band who know what they're here for and where they're going, but even then aren't content to just wait for it to come to them.

LISTEN ON: You Got Yr Cherry Bomb
WATCH ON: The Underdog

Ed Seed, The Mules: "I've only bought one album that was released this year, and it's The Early Learnings of Eugene McGuinness. Technically it's a mini-album, but it's brilliant, so that's my vote."