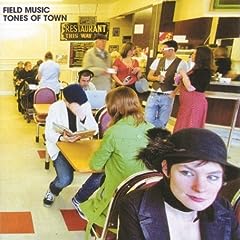 Field Music really haven't had a lot of luck. When their eponymous debut landed two years ago they were completely overshadowed by their friends and occasional colleagues the Futureheads and Maximo Park, who were no less radio friendly but had the post-punk chops. Then when Tones Of Town, as complete and confident a collection of forward thinking while openly past influenced British harmonic guitar pop songs as you'd hope for at this point, came out in january the zeitgeist was with nu-rave and the first wave of post-Arctics chancers. It's no wonder that in June the Brewises and Andrew Moore merely stopped bothering, albeit stressing that this is not necessarily the end of the line for the band. Simply, this album is tighter, better played and more free thinking, constructing pop music of many hues and ideas without becoming bogged down with where they should be going. The point we've made about Field Music before is that there's not that much differentiating them from the MOR manque likes of The Feeling, except that Field Music have, ironically, feeling, not to mention ideas that extend beyond getting on Smooth FM's playlist.

Case in point straight away, Give It Lose It Take It is built on the burial ground of Roxy Music's Virginia Plain, a squiggly synth fighting its way through the smartly driving arrangement, almost Beatlesy, or perhaps more precisely Kinksian, in its range. It's also one of its few linear songs, allowed to move on one path. Sit Tight borrows a few strings from ELO and ideas from Abbey Road for its piqued martial strut, completely changing time for the booming chorus-that-isn't-a-chorus before slowing completely two thirds of the way through and changing into wordless chorales, baroque piano and - but of course! - human beatbox. In Context builds on a drum loop with pinpoint arpeggios, uncanny brotherly harmonies and the feeling that while it retains a solid foundation it might fall in on itself at any point, literally whooping with joy when it emerges from the other side of the built up final chorus into a percussive and fuzzy bass outro, while A House Is Not A Home rides in on a repeating piano riff and countrified guitar but recognises the value of strings when orchestrated correctly and a cunning key lyric like "what’s the use in going home again when it’s always the same". They like a good miniature too, Kingston 113 seconds of pulsing strings, piano voluntaries and ponderances on the meaning of work, as does, unsurprisingly, Working To Work, a summer anthem which finds plenty of space in its arrangement and under its unravelling of how our work defines us. By the time very un-last track like closer She Can Do What She Wants has unravelled, it's clear that what Tones Of Town is is nothing so much as their ideas of disharmonic pop coming together beautifully.

LISTEN ON: Sit Tight
WATCH ON: A House Is Not A Home

David Brewis, Field Music/School Of Language: "Well, as ever, I've hardly listened to a single album from this year and my real album of the year would be Roxy Music, but of the few new records I have heard, the one I've enjoyed listening to the most is Everybody by The Sea And Cake."

Pete Gofton, George Washington Brown: "hard to choose a best overall, but the one I've been listening to most recently is For Emma, Forever Ago by Bon Iver."
Posted by Simon at 12:02 am