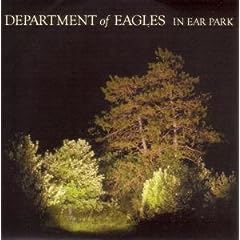 No question Department Of Eagles owe a debt to Grizzly Bear - Daniel Rossen is in both, after all, and their bassist/technical genius Chris Taylor produced In Ear Park - but the real surprise is how far Rossen and Fred Nicolaus have travelled from the more experimentally spliced earlier material. There's still something of the patchwork about it, but this time it's where the individual disciplines - freak folk, Mercury Rev electronic pastorialismm psych-pop - are folded into each other to create an emotional whole without becoming overbalanced.

If as well as Grizzly Bear you're reminded of certain other leading players in the New Weird Americana movement - Animal Collective in their less outre Sung Tongs moments, Akron/Family - in the way it playfully subverts the norms of US folk. The opening title track runs on hazy Spanish guitar that sounds like a gently flowing stream alongside which are sparse piano, progressive more apparent percussion and sumptuous vocals; Around The Bay is as if Panda Bear had to construct Person Pitch from Neil Young and Richard Thompson records. Clearly a lot of this material is very personal for Rossen, the album dedicated to his late father and containing meditations on existance, most directly on Classical Records, where Rossen's voice is front and centre amid hums, clanking percussion and prodded piano as he considers how to deal with loss. As such it often doesn't really need to be extended from basic acoustic structure, cases in point the ethereal piano loop and echoed vocals of Teenagers and the wispy, folky Phantom Other in particular, but bells and whistles are seemingly never added for the sake of it, whether it be big drums or background found sounds. The aforementioned Teenagers shimmers with an approximate West Coast sheen, while someone should alert Van Dyke Parks to Herring Bone. No One Does It Like You throws out a pop curveball in the shape of a rhythm track not too far from Amy Winehouse's Back To Black, if augmented by a wordless backing chorus and the lyric "I curse these legs I walked on". So layered you find something new to love on every listen, Rossen may not reach the heights of his other band - and early live recordings suggest their spring ETA next full-length will be something outstanding - but using the same tools he more than does the job.