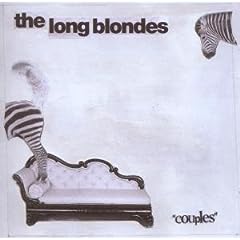 For what unfortunately turned out to be their final act, the Long Blondes plotted a realignment of course that surprised many but really shouldn't have done. From their earliest singles they had something of the "fuck art, let's dance" about them, fading into a lo-fi disco ambience that wanted to spread its wings beyond student union indie night. Besides, better to have an ambition to be Blondie than an ambition to be Sleeper. (Does it help, by the way, that we never thought much of that first album? Probably.)

Yes, Century's Casio disco and Space Invaders effects retain that scent of the fabulously down at heel, despite cold war paranoia lyrical invocations, and they could still do the low-maintenance glamour, but there's a new poise about The Couples and Erin O'Connor (those references to Erin and Lily Cole going to age much?), songs about love studded by fear, jealousy and suspicion. The real sign is in the two songs in the middle where they completely throw out ideas of what the Long Blondes should by NME rights be. Round The Hairpin is a constant fuzz of background whining and feedback bed upon which lays an economic, intriguing drum loop and Kate Jackson turning down her all too often deployed bellow pitch to something just above stage whisper to lull the listener into a false sense of security given she's singing about car crashes. Then Too Clever By Half employs falsetto, a rhythm section in miniature and samples of a match being lit. It's over halfway until a guitar appears, which is more than in the drum machine and piano powered wistful Nostalgia ("I may never have a daughter cos I've far too much to tell her"). When bands make out that they've only just worked out how to translate the arrangements in their heads it usually means MOR. In "Couples"' case it meant gaining the chops and confidence to no longer be this week's indieboy glamourpusses but strike out for more.

Never realised they broke up and the unfortunate circumstances that entailed. Not that I was much of a fan but shame really.

Whilst I do think I was probably a bit too harsh on Couples, I DO feel justified in saying Fulwood Babylon and I'm Coping were the two best things they ever did.