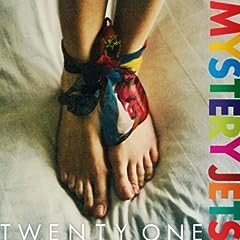 Oddly for a band who made so much of their prog leanings, there's never been much wasteful about the way Mystery Jets go about their craft - suites yes, song structures all over the place yes, but Making Dens was notably short on extended cod-mysticism. Similarly, Twenty One was referred to as their 80s revival album so often that someone could well eventually believe them, yet put aside Two Doors Down, a trying just a little too hard (ah, sax break) synthesis of Squeeze's Black Coffee In Bed and one of those Johnny Hates Jazz-ish shiny suited cod-soul types. Their 80s pop is the conceptual high end, of the Human League and Aztec Camera, of early Cure and Strawberry Switchblade. More than reclamation of retro exercise, though, Twenty One is the a youth in London album.

With this and the Long Blondes album Erol Alkan is proving a dab hand behind the controls, although he'll soon get that fund of ideas and exertion knocked out of him, and the sirens and Daft Punk Discovery-borrowed synthesised guitar wankery of Hideaway are clearly his calling cards, as is the explosiveness of the way the off-harmonied chorus emerges from the tenative end of the chorus. He seems to have encouraged ver Jets to swap using many ideas in as compact a fashion as possible for using fewer ideas and stretching them out so it doesn't show. One night stand from, thanks to Laura Marling's verse, both sides tale Young Love has at least two choruses pretending to be verses, a Motown beat bolstered an athletic bassline and quietly inventive lead guitar work. The subject matter is also a good indication of what we mean by that statement about it being a youthful album - pre-responsibility, pre-settling down, life in front of you, let's fantasise about sexual encounters and make these days last. "Please don’t turn me into a man cos I don’t want to see my skin fold... I never thought growing old could be so tough" Blaine Harrison pleas on Umbrellahead, like Syd Barret at the pub joanna. Half In Love With Elizabeth looks askance at "a man who always sleeps in his clothes" with little moral handwringing. Flakes is a ballad that thinks it isn't, a delicately tender unravelling late night lament all the more touching for being in the middle of dancefloor friendly earworms, even if like Veiled In Grey a closer listen to the social doubt lyrics or just the tone of Harrison's voice would disabuse any notion that this is a goodtime song. Wistful in the face of classy pop of the type we don't get any more, the Mystery Jets have found their true voice in unlikely circumstances.