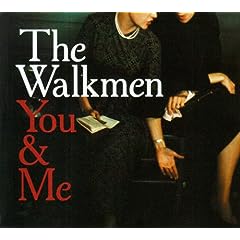 It was beginning to look like The Walkmen would be lost to us on a critical level. After being catapulted into the limelight by the angular, angry Bows + Arrows and the remarkable propulsion of still decade standout single The Rat they chose the path of least irresistability, the far too held back A Hundred Miles Off followed by, oh joy, a track by track cover of Harry Nilsson's Pussy Cats. And then came the realisation that they were letting things slip and with You & Me they were back in the game, albeit a game they don't sound too chipper about playing. Hamilton Leithauser has found a midpoint between his Dylan voice and his roaring voice and the band have headed in the direction of the late night philosopher, drunk on their own depths and on, er, drink.

Dónde Está la Playa opens with a waltzing bassline and splashing drums as Leithauser declares for opening that "it's back to the battle today/But I wouldn't have it any other way", but by the time we get to On The Water the dank, mopey atmosphere has been set. "All the windows are glowing, the branches bending low" Leithauser observes over a blurry after dark tableau which eventually explodes into life with cymbal crashes and some mid-mix jaunty whistling. In The New Year is a song for the ex-lovers and also where they really hit the heights of their first two dolorous albums, Leithauser getting to really give his larynx a workout alongside the mournful fairground organ and scrap guitar, echoed in The Blue Route's hall of mirrors chiming and nostalgia for living a gainful life. The explosive waltz Seven Years Of Holidays (For Stretch) bemoans the travelling, both his own and that of others going away, and decides "these wild nights are no fun"; Red Moon has an audible hangover, as someone who's just taken on Harry Nilsson is wont to have, a slow, intimately shivery recollection of lost love over shimmering brass. The stately, introspective closer If Only It Were True cements the good if surprising news that the Walkmen have established their missteps, realigned accordingly, developed what they were good at and still pack a hefty emotional punch.

In The New Year (live)