Sweeping The Nation Albums Of 2008: Number 4 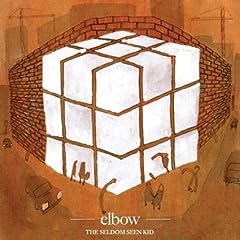 Apart from it being due and just reward for some fundamentally decent people, the great thing about Elbow's Mercury Prize victory was that they didn't go all out for it. Oh, of course The Seldom Seen Kid had its TV montage colonising One Day Like This, but buried within its mini-bombast, essentially a carefully ironed out remake of Grace Under Pressure, is a very unbombastic culminating statement, that "one day like this a year will see me right". No world peace, no unrequited love, no more but no less. As for the rest of it, it was basically the rest of Elbow's career output but more so, possibly railroaded by having to shift down in label size. Round about Leaders Of The Free World there were many glib assertions that Elbow were just a post-Coldplay band, one who didn't open up the distortion pedals and rock out and were, gasp, often medium-paced. Bollocks. Even if the victory lap tour for this album takes them to Wembley next March, these are far more fragile, personal and touching paens to hope and happiness then the vague all-encompassing sweep of a Coldplay lyric could ever encapsulate. They will, essentially, never be U2, nor do they want to be. Sonically detailed, lyrically astute and with Guy Garvey rediscovering his passionate, richly and romantically poetic mojo, it was here that Elbow finally moved from writers' and musicians' band of choice to a contender.

Elbow know better than almost all their contemporaries the benefit of the little things. Rather than hurl itself directly at the listener, it wormed its way into your life before spreading out from within. The very start, Starlings, finds Garvey conflictedly in love, "asking you to back a horse that's good for glue and nothing else" but finding he can't compete, desperately suggesting she "find a man that needs you more than I". "Darling, is this love?" he eventually gives in and asks. The whole backing to this is hypnotic electronic burbling punctuated by a huge explosion of a sustained brass note. There's no chorus. It never takes off in the traditional anthemic song sense. That's the point, you fancy. What remains striking is that, more than fifty years into rock and roll, Garvey is still coming up with brand new ways to say he loves someone. "You are the only thing in any room you're ever in" offers Starlings. "I plant a kiss that wouldn't wake a baby" starts Mirrorball, before Garvey and beau "kissed like we invented it" amid shimmeringly delicate piano and acoustic guitar patterns and a widescreen ballroom scope. An Audience With The Pope reveals "I'm saving the world at 8/But if she says she needs me... Everybody's gonna have to wait." Not that that's all he writes about. There's Grounds For Divorce's blues stomp loosely about alcoholism, while The Fix drags in Richard Hawley for a Morricone referencing Northern gravel-off wherein two raffish hucksters discuss the killing they're about to make on a fixed horse race. There's also an element creeping in of how, on their fourth album, they have come to terms with now being elder statesmen in an indie world where the very definition of indie has shifted away from them, not in a woe-is-us sense but in trying to make sense of where this music thing has taken their lives. "Are we having the time of our lives?" Garvey asks in faltering falsetto at the outset of Weather To Fly before wondering whether they are, documenting not only whether the band have taken the right road thus far but also how it affects us and what we think of them and their music, wrapped up in the most featherlight of affecting melodies and a midpoint colliery brass section. Possibly connected, The Loneliness Of A Tower Crane Driver is a brooding metaphor for ambition losing touch with ground level, and when his towering voice breaks on the first "send up a prayer in my name" the emotions follow it. As it often does throughout. You don't need to know that the album is, like the award, inspired by and dedicated to Bryan Glancy, a singer-songwriter and much admired local scene figure who died two years ago, but it helps explain the certain sensitivity displayed throughout - Grounds For Divorce's opening and closing "some day we'll be drinking with the seldom seen kid" and most obviously Friend Of Ours. In just twelve words, "never very good at goodbyes/So gentle shoulder charge/Love you mate" sums up the confusion of declaring emotions between big men out of shape and is absolutely heartwrenching. He's gone and done it again.

Grounds For Divorce (on Jonathan Ross, as all the proper videos seem to be embedding disabled)