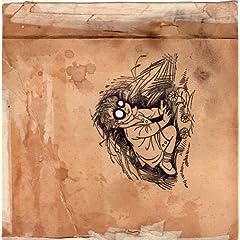 Restlesslist, an instrumental Brighton trio who've been round that ever incestuous scene (and a big hand for Tom White!), have the world of influence as their oyster, their Myspace list ranging from the big obvious names (Gorillaz, Joe Meek) to the crate digging (cLOUDDEAD, The Books) to the dubious (Babyshambles, Frank Sidebottom) to the schematic (horror movie soundtracks, calypso). What welding such disprite elements together - think Anticon for inspiration - has produced on The Rise And Fall Of The Curtain Club is one of those extended soundtracks to an imaginary film, tailor made for B-movies, cold war spy thrillers, spaghetti westerns, clown-based horror films... that sort of unsettlement. If Brighton's other sample-friendly band The Go! Team are soundtracking the high school hop Restlesslist are Stephen King's Carrie.

Single Butlin Breaks is like funfair music from a John Carpenter curated carnival, shimmering guitars and hip hop influenced drums lifted by doses of cornet (and a big hand for Phil Sumner!) pitched somewhere between Ennio Morricone and Harry Palmer. Winterr Part 1 starts off with handclaps, piano, more cornet and the idea that this time we're soundtracking the rollercoaster at said funfair, and suddenly heads deep underground, spacey synths like lost space transmissions fighting with creepy circular guitar figures eventually broken into by fuzzy power chords... and back to the handclaps and sweetness and light. There's a snatch of the clown theme in the outro. Winterr Part 2? Breakbeats under waves of swirling noises from the ghost of the BBC Radiophonic Workshop. It ends with a massive roll of drums and collapsing analogue synths. Of course. Hour Glass is like the whole mis en scene in five minutes, partly in waltz time and incorporating carnival bells and treated guitars, fuzzy samples of much the same, murky tones recalling Prefuse 73 and crazed demonic laughter. Alright, we give in. This could never be background music in the same way first glance contemporaries Lemon Jelly can be, and if you wanted to find close neighbours you'd be looking more towards Errors or a vocal-less The Chap. It's weird, inspired and downright uneasy listening.