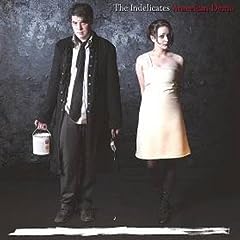 Look at that cover. Are Simon and Julia painting a line between us, the consumer, and they, the artistes? Are they seperating themselves from the rest of music? Are they suggesting American Demo paints them into a corner? All three would fit the tone of an album that sees no reason to make secret its intellectualism yet never ends up hectoring. That Simon's voice is a pretty much exact cross between those of Luke Haines and Carter USM's Jim Bob is entirely fitting, being as his and her lyrics work on the same qualities as those - angry, pop culture decrying, thought provoking, fairly conceptual, leavened with scabrous wit. Every detail you read about their history, all poetry slams and polka dots, seems to fit perfectly into the mock-didacticism they exhibit. The Indelicates have a very strictly cult following and as such this album was either largely ignored or given full marks by reviewers who are driven to write in a style you won't see anywhere else in their output. That's what they do to people, because they sound important.

They're not shy, we'll give them that. The first proper track is called The Last Significant Statement To Be Made In Rock 'n' Roll, in which Simon declares that Elvis "wrote the birth of the teenager, now we come to write its death", presumably using rock'n'roll tropes against themselves as such. The actual point is the dumbing down of music as "rebellion (which) keeps the nation healthy". Other non-standard topics crop up: youth fetishisation (Sixteen), automatic repudiation of US policy whatever the opposition (America), deliberate ignorance (Better To Know), the dearth of worthwhile protest (Julia We Don't Live In The 60s), the post-Zoo repudiaton of feminism (Our Daughters Will Never Be Free), posthumous star reclamation (If Jeff Buckley Had Lived). All the small stuff, yeah. And then there's the love songs. Well, obviously nothing that easy to define - New Art For The People is love as mutual destruction through art and selfish obsession, opening with the arresting "but for the come (sic) in your hair, the cocaine on your teeth" which 1998 Jarvis would have blanched at and ending up as a sort of Fairytale Of New Cross. Stars starts "I'm in love with the boy next door, he treats me like a filthy whore" and heads deeper before Julia briefly becomes a British Amanda Palmer. Unity Mitford is a gorgeous sounding love letter from the subject to her idol, Adolf Hitler. You get the picture. Musically there's hints at the Modern Lovers and New Pornographers, cabaret and tweepop, until America comes across like S*M*A*S*H produced by Jim Steinman, guitar sound and all. We Hate The Kids ends (not counting the hidden track) with a statement as pointed at the one the album began with, a passionate Transmission-quoting race to the finish of the industry's tricks and by extension, literally given it ends "no more music, thank you and goodnight", pop culture. It didn't succeed. Don't expect them to recalibrate their aims.