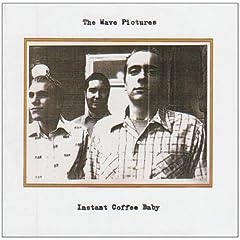 Nobody, or at least none of his British indie-like-mamma-used-to-make contemporaries, writes like David Tattersall. (Or as fast, given the Wave Pictures have at least two albums planned for 2009.) One of those overnight sensations that have taken years to get there, having been self-reared from early in the decade and Instant Coffee Baby being the first a proper label has taken a dip on. We're surprised it took so long, but then again The Wave Pictures fit into a certain sphere at the moment, where former collaborators Jeffrey Lewis, John Darnielle's The Mountain Goats and Herman Dune are garnering more widespread attention and Hefner are being slowly reassessed in the positive. (Although of course there's nothing stopping you claiming they sound like a "second-rate The Enemy", or at least nothing legal.) Like Darren Hayman - yep, they've played with him too and he turns up on backing vocals on one track - Tattersall wears easily the mantle of shambling bedsit poet on lo-fi equipment, anti-romantic and sticking up for the little smart man. Sings a bit like him too. The recording sounds relaxed and informal, built on fairly base rhythmic materials and with vocalists' ad-libs and the odd giggle left in. The writing? Well, that's another plane entirely. In a year when so many male singers traded in inspecifics, Tattersall finds extended tales in the little things. So much abstract imagery, so many novelic scenes, so much detail and poetic effort shed on the mundane passing thought so as to make it seem like an apotheosis, self-aware and joyous, passing the latter onto you, the listener. Or, as it may seem, fellow experiencer.

It's a struggle not to just make up the word count with quotes, but we'll try. Not too hard not to, though, especially as Leave That Scene Behind contains words from a dumpee - "David, you'll always be a baby brother and you’ll always be a mother's son/And you’ll always be somebody's favourite pupil but you’ll never be the man that I want". I Love You Like A Madman promises that starts "if I made it through Christmas without smoking until your parents went to bed", for which his filip will be "I'll buy you bras instead of pickled eggs, chocolate instead of chutney". It's that mix of spot on insight elevating everyday events and the occasional moment of inspired ridiculousness that pepper these kitchen sink mini-dramas that could be no more peculiarly British, all with the minimum of musical garnish - a violin drifts through Strange Fruit For David (which features the celebrated statue/marmalade gambit), I Love You Like A Madman features a brass section and, as anyone who's seen them live knows, Tattersall in particular likes a good solo. It's not just the local imagery in Friday Night In Loughborough that marks out its genuine small town ennui - hats off to rock'n'roll's first namecheck for Walton On The Wolds - but the asides of fighting squaddies, vomiting drinkers and secretly unwilling 24 hour party people. The title track is set in the same locale, an epic in context to everything else here and featuring a plot point based on "your Italian ex-boyfriend's coffee machine" which is clearly heading towards some sort of crucial denouement... which turns out to be "you got cystitis, didn't you?" And mighty whammy bar solo away. "Everyone who knows me knows I make up all these stories" Tattersall admits on the Jonathan Richman echoing We Come Alive. Fair enough, but what invention.