Sweeping The Nation Albums Of 2008: Number 8 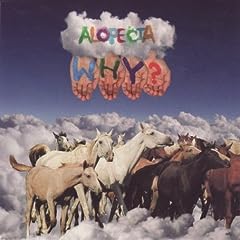 Tokenism? Pale boy anti-tokenism, actually. One of the big viral web hits of the year was a Canadian site entitled Stuff White People Like. Not in the Def Jam Comedy cliche "it's funny cos it's true!" sense, obviously, but in the middle-class, educated, metropolitan, liberally artistic, liberally political, conscious, hipster sense. Yeah, basically its readership is people who think it's about someone else because they're the ones in on the joke. As Charlie Brooker once said about Nathan Barley, its core audience ended up being either people like Nathan Barley or, more crucially, people like Dan Ashcroft. The music made by Yoni Wolf - University of Cincinnati graduate, liberally artistic, likely to be politically liberal, very much conscious, loved by hipsters - as Why? couldn't be more like stuff white people like, despite the Anticon breeding putting it squarely in the hip hop sections. Hip hop white middle class hipsters can deal with while the traditional market continue sucking on their syrup, which is why it sells a million or two copies fewer. Actually, although Wolf's flow has altered but not changed direction Alopecia is hardly hip hop at all, not even if you still counted cLOUDDEAD as such. What it is... well, we'll come back to you on that.

The Why? collective is by now far more experimental indie-folk-hop than it is the genres either side of its place in the rack, which lends it an odd analogue acoustic-plus-beats sound with a litany of influences in reserve - witness how The Vowels Pt 2 closes with an elongated shoegazing whirr or A Sky For Shoeing Horses Under's debt to Philip Glass. But it works because of what Wolf's uncertain drawl highlights, odd, faintly surrealist lyrics clash with open hearted self-examination and generally painting vivid pictures with words about locations as much as self, the flow of his words not belonging to standard rhyming or poetry recital but something rhythmically obtuse. And, as with Elephant Eyelash, it's mostly about a girl, and one that no longer likes him to put the seal on it. Good Friday paints Wolf as pathetically missing a girl, sounding like a 3am stream of consciousness as he recounts "blowing kisses to disinterested bitches... sending sexy SMSes to my ex's new man 'cause i can". Fair to say he's not got totally over it by These New Presidents ("frowning in my pocket/Can persuade no god to let me let you talk") That said, if anyone came up with a more striking line in 2008 than "even though I haven’t seen you in years, yours is a funeral I’d fly to from anywhere" we might well have missed it. Don't think Wolf wants us to feel sorry for, say, the guilt of Song Of The Sad Assassin ("I feel like a loop of the last eight frames of film before a slow motion Lee Harvey Oswald gets shot in the gut and killed"), the slo-mo murderous stalking narrative of Simeon's Dilemma or the inability to remain faithful of the tongue twisting chaing gang of The Fall Of Mr Fifths, surely the only song that will ever get away with referencing the "city funded Steiner School bilingual or Montessori". Pale boy indie kids like us get easily impressed by that sort of thing, see. But then there's far more than enough in Alopecia to get very impressed by.

Song Of The Sad Assassin

Be honest, reader, the first paragraph is a bit cringingly rubbish, isn't it?

Maybe not so much rubbish as long winded. But I kind of liked it.

Anyway, this simply is my album of the year, if I go by amount of joy garnered from listening to it.

Pssst. These "Few" Presidents, I think you'll find. This is one of my very favourites of the year too.

Well, N and F are so close on the keyboard you can see how that happened.