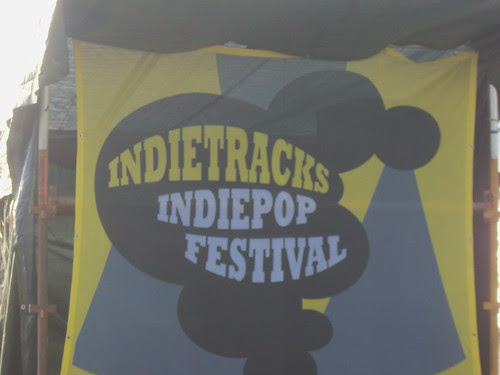 Hello there. Back from a fine weekend among like minded people amid the glorious infrastructure of Indietracks. Having got ten hours and less than halfway through the grand review we realised we were giving ourselves a potential aneurysm for nothing, so fuck that. Here are the bits we really want to mention, though, in chronological order: 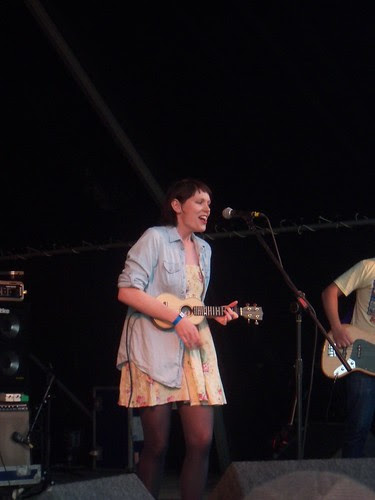 - Allo Darlin'! Bit of a shame that the set of the weekend came from the second band on, but nobody plays ukelele with the enthusiasm of Elizabeth Morris and few have such craft about the summer-tinged joy of their songwriting either, so exuberant and full of excitable bounce while still packing emotional, evocative content. Max from the Smittens stands in on Dreaming doing Monster Bobby doing Calvin Johnson, while the maven tendencies of some of the melodies are acknowledged as The Polaroid Song incorporates a snatch of Walk Like An Egyptian. "I keep seeing people I know, which isn't because there's so many people here but because everyone I know is here" Elizabeth marvels mid-set, before the first of many, many onstage references to Fortuna Pop!'s Sean Price. The admiration is more than reciprocated. 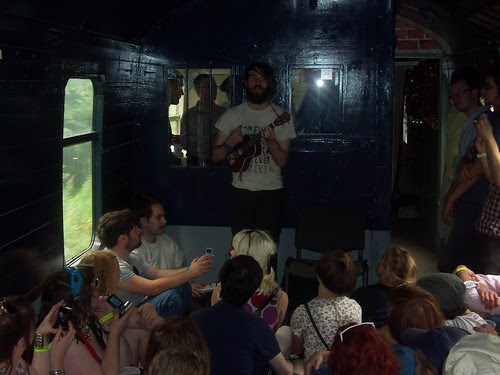 - Lime Chalks and Jam On Bread, the two we saw of the fabled sets on a very warm train. Birmingham's own low-key harmonic folk-pop contenders opened our festival warm-up gig (went very well, thanks) and their lilting goodness and emergency radio editing of copious swearing choruses on seeing children present was a fine way to start the first full day, even if they did run out of rehearsed songs and have to improvise until reaching the station again. Meanwhile Manchester-via-Grimsby's own beardy ukelele troubadour, whose first gig we realised during the weekend we saw, got a packed out train for his (and Chris from Internet Forever on backing melodica and thighslaps) curiously unique cracked little odes to data entry, the perils of Wikipedia health research and the pain of being ineligible for release on Labrador Records. Stirring stuff. Forgot to get a copy of his new album, though.

- It took us a while to get into The Just Joans, we should admit, but by the end of their tram shed set we saw what all the localised fuss was about. The force of their tales of provinciality and heartbreak are too well mined to ignore, the new songs sound spot on and the four-part chorality brought into What Do We Do Now? hammered home the point. A triumph. 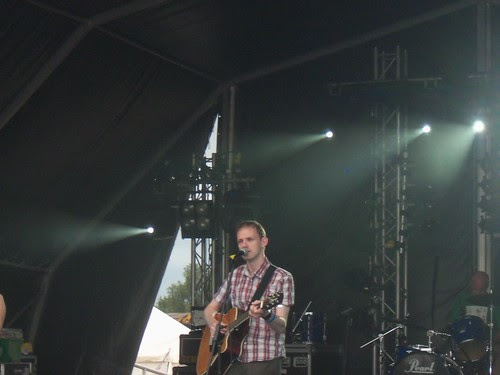 - Ballboy's drummer got married in the signal box on Sunday morning. For someone who works alongside Gordon McIntyre, perhaps he felt accustomed to life's rich tapestry. The band set on Saturday, vocal mic cutout notwithstanding, was great - three new songs, Elizabeth Morris doing the monologue on A Europewide Search For Love, a surprising cover of Beat Happening's Indian Summer. McIntyre's own solo set, filling in for absent church headliners, on Sunday might have been even better, mining the most touching of his work (I Lost You But I Found Country Music would have been a great set closer had he not got an encore) and drawing out a couple more new ones. Some day people on a wider scale will realise what a lyric writer he is. 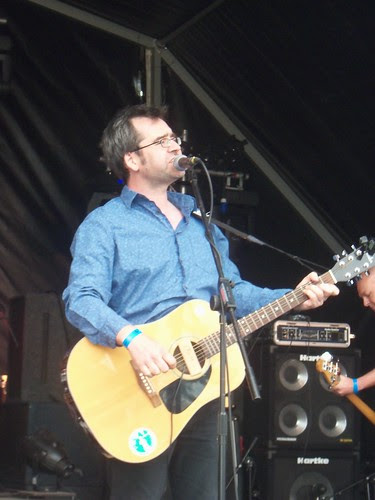 - MJ Hibbett & The Validators were opening the main stage on Sunday, in Mark's opinion "the legends slot - will it be Tony Bennett? Will it be Rolf Harris?" Actually it could only ever be MJ Hibbett, sorting out the indiepop wheat from part-timer chaff with his songs of wryness (but, BBC, not strictly comedy) and great plain truth. He plays Leave My Brother Alone, a song that has been known to make people cry. He plays two tracks from sci-fi rock opera, forthcoming Edinburgh show and some time after that album Dinosaur Planet. Do The Indie Kid breaks all known records for taking up of the titular dance step, and features a surprisingly successful crowdsourced Music Of The Future. If your Twitter feed at around 2pm on Sunday featured a load of messages just reading 'happiness' or '#happiness', this was why. 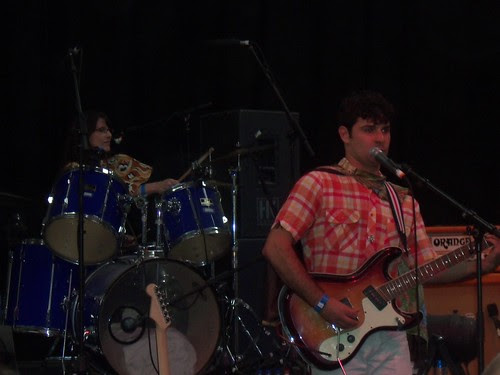 - Everyone went on so much about the packed out The Specific Heats church set last year, where they blew up their reverb machine with the first chord, that we couldn't miss them this time around. It was a wise decision, as the becaped Brooklynites' superior psych-garage effortlessly blew many a more hyped contender for this summer of surf-rock away within a song or two, most of the set from a forthcoming album. Leader Mat Patalano draws all sorts of coruscating noise out of his guitar, the drummer never stops grinning, and for once the echoey nature of the shed seems to work in a band's favour. 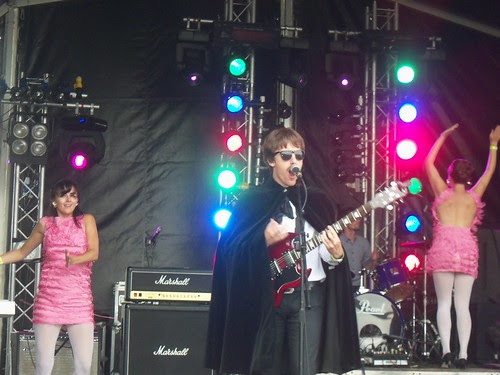 - Somehow you knew the ever changing retro R&B (no, the original type) garage types The Loves would put on a show for their last Indietracks. For starters, they come out to the Star Wars theme with three dancers who proceed to strut their Ready Steady Go! thing to three songs during the set. Simon Love is wearing a cape. Next to him as emergency stand-in backing singer is Liz from The School. And so it proceeds through glorious semi-pastiche and Simon's banter ("this is from our third album, which recently went zinc"). Then they bring on Jesus, who looks suspiciously like Jimmy from the Bobby McGees in a sheet. They finish, in claimed honour of the Faces, by kicking footballs into the crowd "like a cut price Flaming Lips". It almost doesn't register that it all sounds better and more immediate live. 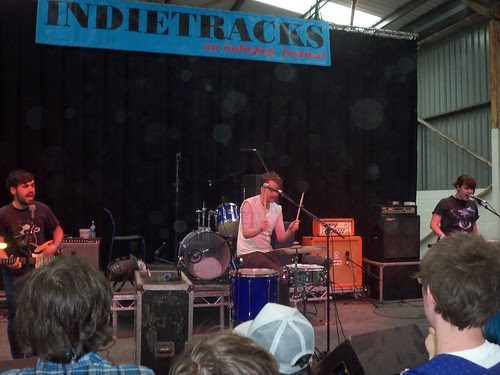 - We've finally worked out Internet Forever. They're the patent pending of noise-twee. See, you've got the keyboard sound, Laura's vocals and the sense that it's hanging onto the songs for dear life, and Chris on athletic stand-up drumming, then Craig stage right putting a great mass of guitar noise on top of everything. They cover Dire Straits' Walk Of Life without referring to it being a cover. They attempt to get a Twitter rumour that Nathan from Wavves has died going. They claim their website is on Geocities, but you'll need to leave a message in the guestbook (it's not, obviously). Pete Gofton appears to add handclaps to half a song. Much as they know about what's around them, they're a great mallet of dissonance in the middle of the indiepop. 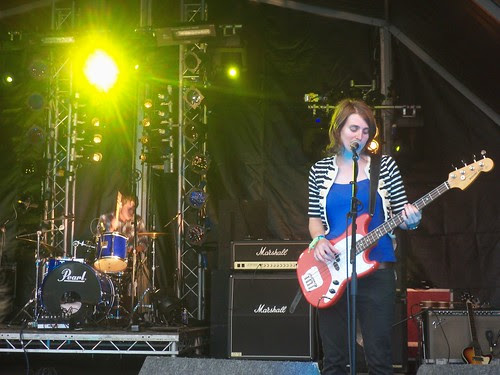 - The cheering thing about Standard Fare is, even though they've been reviewed in proper newspapers and interviewed on national radio stations, they're still permanently surprised and not a little nervous to find people really like them and willingly turn out to see them. Then again, it's increasingly apparent that they have the aura of pop genius about them. They're aided by the reappearance, as seen at several popshows over the last year, of the Standard Fare Voluntary Dance Squad (pending group title), Philadelphia and Dancing in particular getting great swathes of people down the front moving. There's a new song, which we understand is called Suitcase, that's faster and equally fresh and contains a great Danny How guitar solo, and another new one that they hadn't finished so got Brad from One Happy Island to add a trumpet coda to before covering his own band's Mothball. Like their friends Allo Darlin', and Elizabeth is up near the front singing along, they're ready for prime time. 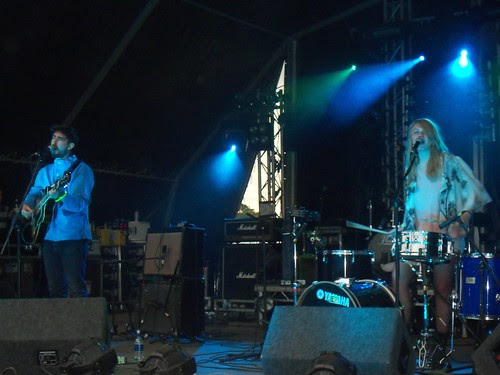 - Slow Club are embarking on recording their second album at the end of summer, with just some Japanese dates and a couple of festivals between then and now. Hence, riskily for a festival where they don't strictly fit in per se, much of their set is taken up with new songs, those played mostly mining their affecting ballad range. They seem a little uptight before Rebecca breaks a stick during Because We're Dead, the pause seemingly allowing them to relax and really take off. By Giving Up On Love her tambourine stand is on the verge of collapse. The intimacy the pair can bring to any stage is oft said but true, as is Rebecca's vocal ability. But who knew the properly famous and signed band would be among the most ramshackle of the day? 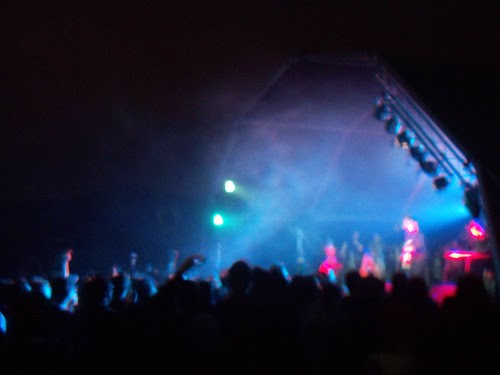 - The Pains of Being Pure At Heart were the final band on, the group taking the Indietracks ethos to a wider audience, and both before and during the set they were keen to talk up the unifying spirit of the event and the community into which they blossomed, thanking plenty of individuals as they go (and again with Sean Price jokes). The gods of electricity though aren't initially on their side. It's clear the guitars don't sound right early on, and after second song This Love Is Fucking Right there's a long pause to sort out whatever had malfunctioned. From then on you can almost feel their confidence and power grow until they really were playing to a level that the situation, and their own place therein, demanded. Three new songs were tried out, all edging back from the more synthy sound the last single suggested into more able waters. In terms of their own humbled demeanour, namechecking the Manhattan Love Suicides as the band that inspired them to form and one day make it over here to the festival, they eventually lived up to their heat.


These we also saw: Veronica Falls (decent enough, but sunk after the hopeless start that saw them play two songs they thought were part of the soundcheck despite being 25 minutes after their stage time), Everybody Was In The French Resistance... Now! (too obscure a concept to headline, but few can banter like Eddie Argos and his closing just thought up rewrite for the occasion Formed A Side Project ("it'll probably make the Israel and Palestine situation worse")), Red Shoe Diaries (very useful, but could only stop for two songs), This Many Boyfriends (enthusiastic), Linda Guilala (too clean and uninvolved), La La Love You (five excitable Spaniards in pink jackets playing Ramones-on-even-more-cheap-speed punk-pop with endless enthusiasm, perpetual motion, one member not actually playing the instrument he's behind and not much stylistic variation), Antarctica Takes It! (can't remember), The Smittens (joyful, but not as good at jangly power-pop as)..., Boy Genius (see before), The Orchids (dated), Stars In Coma (seemed to just get going with the danceability when they finished), Tender Trap (saw four songs, the last Talulah Gosh's My Best Friend), The Primitives (OK, maybe they didn't really have the strong back catalogue), Winston Echo (whimsy is a good thing), The Blanche Hudson Weekend (saw one and a half songs and the inevitable blizzard of feedback ending), Shrag (half the set spent talking to musicians in the merch tent, the other watching a set not as good at that they did there two years earlier), The Pooh Sticks (packed the shed out! People with signs! Only one song we know, and that, On Tape, never played live before! Ah, but what we saw of the rest of it was very decent) That means that through circumstance we unfortunately missed Foxes!, Paisley & Charlie, White Town, David Tattersall, Springfactory and Sarandon. 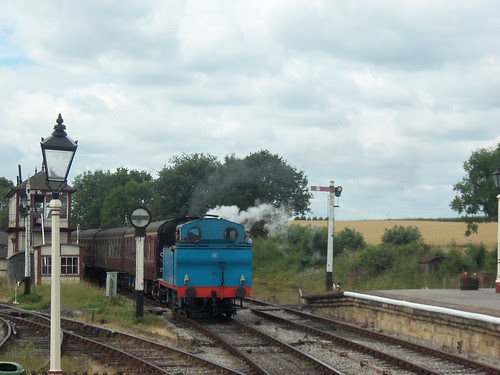 In summary: wonderful weekend by the abandoned stock, once again. And hello again to everyone we met. Any further questions?

Email ThisBlogThis!Share to TwitterShare to FacebookShare to Pinterest
Labels: indietracks