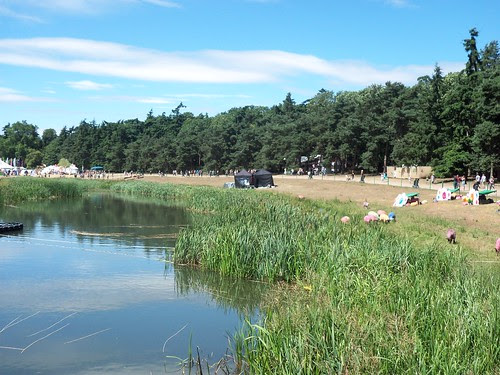 Want to know what this year's festival 'thing' might be? Bubbles. All over the place, they were. Especially kids with big wands that make huge bubbles.

Some however had different, more left field ideas of the perfect festival combination. 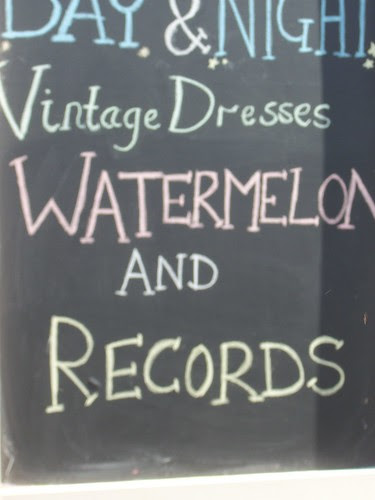 Having got out of the habit of needing to obsessively know who and what each new artist at a festival is in favour of letting chance rule early in the day, we don't know what we'd have assumed a local act called Cevanne would be like. Fair bet, though, that 'obtuse skank' would have been somewhere down the list. 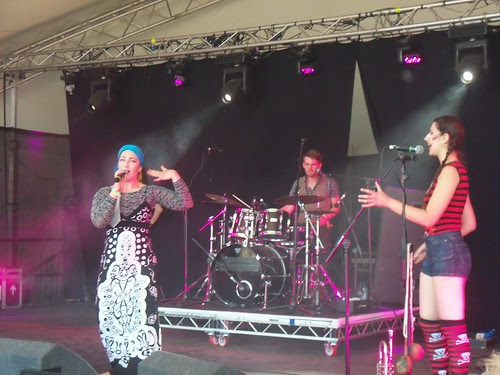 Cevanne Horrocks-Hopayian, in fact, restlessly dancing across the stage to an equally jazz reggae melange made out of double bass, trumpet, cello, drums and Cevanne's own command of that typical ska instrument, the harp. There's a great sense of the theatrical in what she does, allied to lyrics both politicised and fantastical. It's always surprised us, being regular viewers of the skanking chaos whenever Summer Sundae puts ska on, that this sort of thing isn't more valued by more mainstream festivals, as it always slowly draws a keen crowd, especially when it's this energetic and undeniable.

Last year's surprise Mercury nominees Sweet Billy Pilgrim got an Obelisk slot and failed to do that much with it - you can see their influences - Peter Gabriel, Talk Talk - but what they make of it, lush art-folk, veered too near the superior Leisure Society's range. After a couple of songs Spectrals by the Lake seemed more appealing - not a band/person (given it's Louis Jones alone on record) we've been particularly keen on the recorded output of, but again divorced from their stretch for a lo-fi aura their adherence to rock'n'roll and surf with psychedelic tinges and maybe a little Teenage Fanclub lurking somewhere makes more sense when you can hear properly the work that's gone into putting it together underneath.

Downwind, especially from the comedy tent where Mark Watson drops in a Pavement lyric causing audible surprise around us in doing so (not really sure why, it's not as if people who've been on telly are banned from listening to alternative music), Mumford & Sons are being treated like homecoming heroes by the weekend's only real capacity crowd in the Obelisk arena, so much so there seems hardly anyone elsewhere on site. Especially not watching The Agitator, the current vehicle through which Derek Meins gets to shout at an audience. It's not as if he isn't putting the effort in either, hollering his injustice charged rhythmic stanzas all over the shop and across the syllables backed by ex-Maccabees sticksman Robert Dylan Thomas' athletically charging drums, occasionally launching into shaker action or essaying a crab dance across the stage. Frankly, we're not sure whether this is really good or what. We don't think anyone else is either. 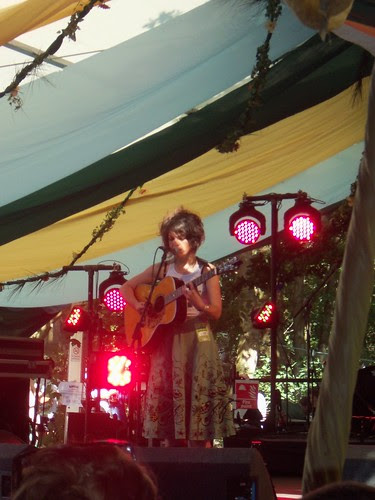 At 4.30pm, we were faced with a horrible four-way clash. Dirty Projectors, Kristin Hersh, Jesca Hoop and Mitchell Museum, two supported well by us, one an unmissable live experience, one a great of her craft. Three of whom we've also seen before, which is why we started out in Sunrise with Jesca Hoop. With the current vogue for away-with-the-fairies female singers of all types we can see why some may shy away from her high register-testing skittishness, daffy between song chat and songs about nature and dreaming, but there's little twee about it in the end, quirky maybe but grounded by a certain leftfield inventiveness. Not nearly as inventive as Dirty Projectors, however, as we make our excuses halfway through to watch Dave Longstreth pluck all sorts of wheedling, labyrinthine Afro-guitar magic out of the air against gymnastic polyrhythms and an astonishingly tight band, not to mention the intricacy of the harmonies. Something so individually opaque does feel a little lost playing out on the big stage to an audience who seem mostly to be sitting or laying down, but then Stillness Is The Move kicks in and reaches for the sky as much as Amber Coffman's vocal does, and everywhere pockets of resistance are falling to some approximation of dancing.

Much more of that was going on at Yeasayer, probably the most packed the Word Arena got all weekend bar The XX on Saturday and possibly The National. Maybe it's down to their more dance-friendly direction, plenty of delay and retro synth suggesting a good founding in rave but with plenty, perhaps too much at times, going on beyond the surface. If things don't totally take off despite the size and willingness of the crowd until ONE turns up as the penultimate song, by the time they finish with Ambling Alp everyone esconsed in the centre seems to be singing along.

You'll not get anything like that with These New Puritans, but they too have advanced the sound they emerged with with the aid of special black boxes, just in a completely different direction. A three-strong woodwind section and dual drumkit provide the light and, more commonly, heavy shade while keyboards and effects fill in the sound effects, taiko drums, orchestral sections, sub-bass and general deep disquiet around the textures of dancehall tribal conflict Hidden suggests, Jack Barnett up front like a paranoid preacher. Of course an album that great in scope isn't going to be entirely replicated well on stage, especially not in the open air in the middle of a glade, but the ambition is highly appreciated. More sub-bass filled the Word Arena in the approximation of an MRI machine as sampled on Charlotte Gainsbourg's similarly titled album. Gainsbourg makes for a fine frontwoman, as logically she should, and is in good voice but seems much more comfortable reinterpreting her father's work than relaying her own.

Back to Sunrise, and to a full tent, and one really going for it at the front. The secret must have got out about The Pains Of Being Pure At Heart. You wouldn't think their scuzzy, lively, C86-y sound would suit these conditions as well as they do, but there's a warmth and inclusivity about it, not to mention two just as good new songs, that doesn't so much demand attention as suggest you join in the congregation admiring the strychnine laced floss of Kip and Peggy's harmonies and Kip's claim that as it's the first date of their European tour we're catching them at their happiest. (Hope not, they're popping up again in our presence this weekend) It's in this ordinary magic that they thrive.

You can tell a lot from a Robyn Hitchcock festival audience, even one as small as that he played to. Playing a short set in the literary tent at Robin Ince's invitation, and watched by Adam Buxton, it's worth keeping an eye on those baffled by the lyrics and gnomic between song announcements and those who converted long ago but still probably couldn't place all the set in his sprawling discography. Over on the Lake Stage headlining slot things are changing for Beth Jeans Houghton. No big wig, no unlikely headwear, just a brown beehive, leopard print top and skintight leggings as her only concessions to previous sartorial oddness. Also gone is an acoustic guitar, switching between electric and banjo for a set of songs that while for the most part are still indebted to folk and rolling country take some unlikely deviations. A rockabilly and proud cover of Elvis' Devil In Disguise, for one. For another, a sweary cowpunk song dedicated to the band's tour manager for fishing Beth's sunglasses out of a toilet after she'd managed to both drop them in and then urinate on them. When the bass player's daughter comes on to dance to I Will Return I Promise the audience is putty in their collective hands. 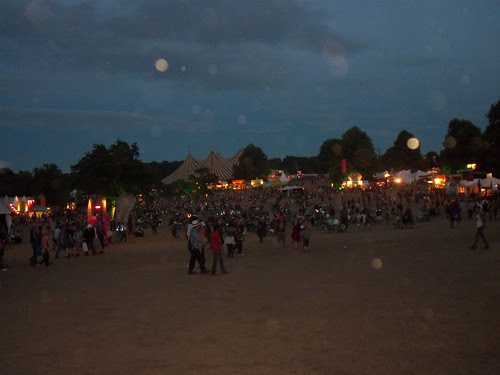 A little time spent with Jake tribute act The Fake Thackrays in the poetry tent, notable for one of the two singers neither attempting to replicate Thackray's baritone nor accent - that's how it works! - the festival for us finished not with headliners Vampire Weekend but back in The Word Arena with four men across the front of the stage, each dramatically spotlit like Samuel Beckett stage directing Kraftwerk. This was Grizzly Bear, for what they said would be their last European gig for quite some time, and it's not even the best lighting we've seen them in after the flashing lights in jars of their spring UK tour. Such concerns aside, they remain as special and spectral a live band as they were on that last occasion, the four part harmonies floating, towering and mysterious while always spot on, the interplay natural honed from a year on the road and however long playing together intuitively before that. Describing it somehow feels wrong, as if you were giving away trade secrets, when all it is is beautifully textured songs delivered to their optimum standard by four talented and inventive musicians, and sometimes music reviewing can only boil down to that. Furthermore, for a festival that had so much bad vibe around and which didn't start by pulling up any trees, it seemed it had come good over time.

More photos from the weekend, at least for the bits we could get within range of or when our camera was working, on Flickr
Posted by Simon at 12:00 am

I was one of the few people watching The Agitator... firstly from a vantage point on the grass a little up the hill, then I moved towards the stage when it became obvious that closer attention was required. My first encounter - I thought he was great. Surprisingly my friends didn't, tho I think they were a little too chilled for full-on rant mode at that point.

NIce review. Here's the show you mention of Cevanne and her Big Ears band!