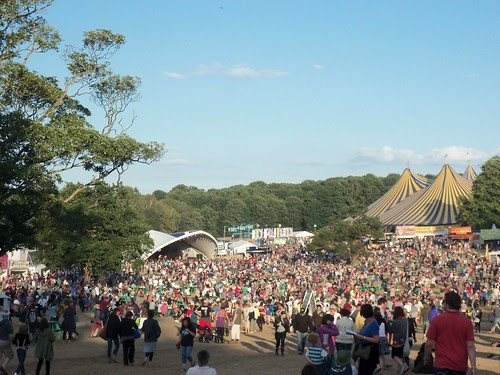 You can't help thinking there's only one place where Robin Ince could introduce a guest with the words "he's a doctor..." and find the locale cheering. Dr Ben Goldacre, of course, running through the whole McKeith farrago, and an acceptable way to spend a few minutes in the knowledge that the queue to see Daniel Kitson in the theatre tent stretches back an impressive distance. Otherwise we're thrust into the audible space of more Lake Stage opening locals, The Cads, who have some interesting ideas momentarily making themselves known but are far too quick to stick to post-punk revival by rote, all hi-hat and standard indie disco rough guitar.

You could argue that in their own way School Of Seven Bells are not stretching much of a boundary - shoegaze isn't exactly out of favour at the moment - but listen deeper and there seems a greater depth to their approach that belies the moments when Benjamin Curtis lets loose with an airy, atmospheric tidal wave of guitar noise. We'd venture, actually, that this is if you want to be picky more of a utalitarian air of coldwave, the continental sub-genre that values loops and minimalist structures forming a Martin Hannett inspired all encompassing sound. What stops it from icing over is the sonic wash that makes early Lush or Slowdive come to mind allied to the spectral harmony of the Deheza twins, lead vocalist Alejandra forceful when needs be, more often making like spaced out synthpop with the synths played down.

John Grant on the Obelisk has a keen knot of followers who know the song titles down the front. You can see why given what has gone into his songs, and despite really performing to an audience that's half sat down trying not to tan too much despite the blazing hot circumstances (like that all weekend, actually, bar a couple of Saturday morning showers) he's doubtless won more followers with his wracked, lightly acerbic lyrics, heavy on emotional drag, capable of switching from wry to down in an instant, against Americana that just about steers clear of politeness. 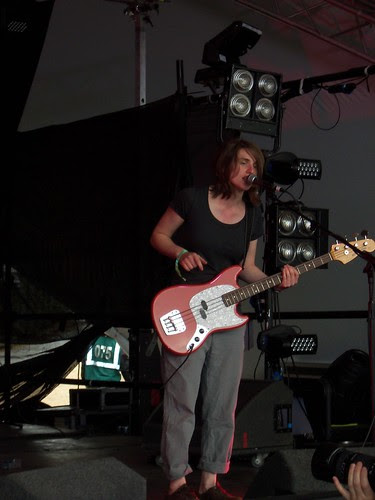 The indiepop hordes here for Belle & Sebastian get to descend on the Lake Stage for a fine example of where we are with this sort of thing now. Standard Fare are very slowly picking up a following for the simple things they do well. They may be a tiny bit ramshackle and untutored, and they seem a trifle nervous - Emma Kupa forgets the lyrics at one point, claiming afterwards they were playing the song so well she thought she was listening to the CD - but there's something at their core that rings true, likeable and above all else smart, hook laden and with a melodic ease counteracting the conflicted love of the lyrics. They sneak in a new song, seemingly faster than most of their output and on first listen equally as good. Meanwhile on the big rig Frank Turner is completing his transformation into an AOR fist raiser of sloganeering and self-regard, a long and uncomfortable way from where he started. And he doesn't finish with The Ballad Of Me And My Friends.

Stephen Black, AKA Sweet Baboo, has a rather more downhome approach to translating his songs to the stage. The banter may be as long as the songs, but it's of that rare type where it's properly entertaining rather than making you want to point out how long his slot is. Similarly endearing are his countrified songs, hinting at all sorts of dark subject matter - he claims on playing his mother one song she replied "that's nice, is it about suicide?" - but with an odd and optimistic centre. Next, while James are on the Obelisk pretty much having to have the hits and songs people know forced out of them at least early on, over in the woods is Julie Campbell, the working name of Lonelady, all sharp haircut and artful disinterest. And all Manchester 1980 too, in an early Factory Records way, all nervy clipped guitar and punchily dark post-punk keyboards. Not something that'll leap out at the undiscerning, but worthy of further investigation. Meanwhile back at the sort of places where people willingly go The Maccabees are giving their album tracks a thorough run through with no great engagement, almost sapping what energy was there out of Wall Of Arms. 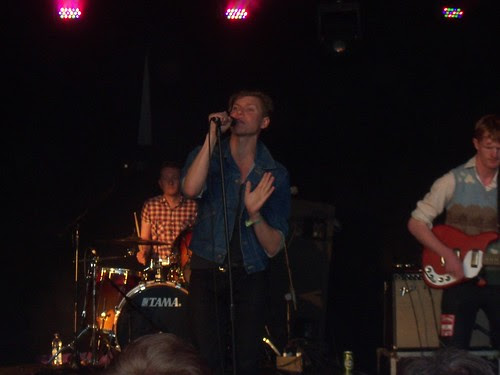 They might be playing every second festival this summer, or thereabouts, but given headline status on the Lake stage Frankie and the Heartstrings - was that really Paul Heaton introducing them? - are up for the challenge. Given the civic pride we feel having been told that we were the first people to write about them way back when, there's been a lot of disquiet about their rise among people we otherwise trust. Well, poo to them. It was as if an electric charge ran through Frankie Francis (someone, incidentally, we ended up standing near quite a few times during other bands' sets, although not nearly as often as we found Nestor from Sky Larkin in our vicinity), as he switched from effusive praise for his Wichita label bosses to careering across the stage and onto the monitors, a consummate showman in waiting in front of his band's Postcard Records-recalling proper indie.

But as we say, they're playing in our vicinity again this summer, and Archie Bronson Outfit aren't. At first notice, they seem to be wearing kaftans, or some sort of tribal smock. At second, the restricted sound levels really aren't doing justice to the kind of mania they can envelop an audience in. At third, it doesn't matter. It's still a full weapons grade attack that might flirt with the blues the band once lived alongside but, with an additional member adding noises over the top, prefers to cut into the air with serrated, occasionally disco dallying primordial propulsion in freakout clothing. That they offer a free T-shirt to the first person at the front willing to dance naked to Chunk is somehow fitting. That the one to take them up on it is a pasty bloke is unsurprising.

With just enough time to bump into Cardiff scene majordomo (and fellow The Line Of Best Fit contributor, and day's enthusiastic Lake Stage DJ) Jen Long and then watch Islet wrestle each other to the ground, so to our headliners, heroes, champions and returning conquerors - their first UK gig in six weeks short of four years - Belle and Sebastian. Having seen them at one of their last gigs we knew that Stuart Murdoch was far from the shy introvert painted as during the Sinister years, but his properly funny repartee and charismatic ease between songs strikes us as the sort of person who if not having lived up for this moment then has mastered how to talk to an audience as if it were a one to one, even if over-preparation meant Stars Of Track And Field had to be dropped from the set for time. Indeed, one of the set highlights came when Murdoch revealed a dream in which he'd laid a challenge down to Stevie Jackson, which resulted in this:

Fairly evident from the ending that they hadn't rehearsed that much. 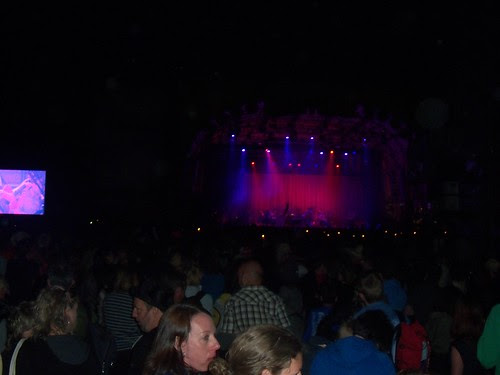 With a full string section backing, it was as if they'd never been away, adding enough light and shade to the earlier songs to make them work on the big stage - Fox In The Snow, with lighters aloft at Stuart's suggestion (that's what that is above), and Judy And The Dream Of Horses were particular highlights, and at last we can say we've seen them do The State I Am In - and showcasing two new songs from a new album out some time in the autumn, both progressing from where they left off although where they fit in the band's great scheme of things remains open to question. What doesn't is their back catalogue strength and that of Murdoch as a writer, and the intricate inter-band knowledge and ability that gives the songs justice when headlining a festival of this size. Even Funny Little Frog sounded great. An excitable group of fans at the front are invited onstage to dance to The Boy With The Arab Strap. Down at ground level, everyone understood just how they felt.

All this, and the rare pleasure of seeing Ben Miller and David Cross duet on a version of Under Pressure. Who could resist?
Posted by Simon at 12:00 am

LoneJulie's more like Peej Harvey than the old Factory shtuff. Was the FUC51 blog all in vain?

I very nearly cross-referenced FUC51 at that point as the obvious pitfall in making that comparison, but I say it stands for the Hannett air/northern post-punk redacted comparative image.