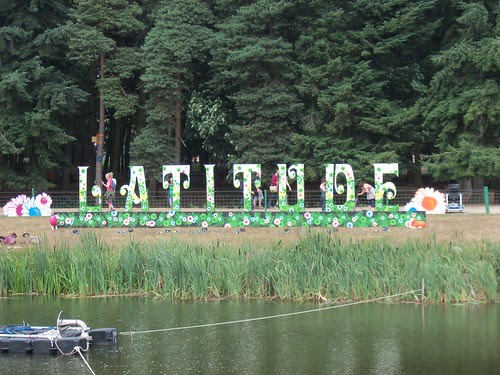 There was an odd atmosphere around Latitude this year, their fifth and our second. Known as a Radio 4/Guardianista kind of experience with its arts side and green, family friendly credentials, this year seemed more populated than ever by the younger, Skins-ier demographic, maybe a sideline of the unspoken belief of Melvin Benn and the festival organisers that last year's event had been aimed at too old an audience and almost certainly encouraged by the ramping up of capacity without the main areas being made any bigger. There was of course the horrifying news of two reported rapes, but that only became apparent to most people on returning home. Added to which the Sunrise Arena was closed for some time after a central canopy support pole collapsed in high winds, the main stage timings on Saturday changed, bands were sometimes going on more than five minutes early and the route from arena to car park changed without any informative signs. In fairness, most people were still friendly and the music stages didn't seem that much more packed compared to last year, but whether culturally or economically something seemed to have slightly changed.

To be honest, we started our musical day at the Lake Stage with These Ghosts because we had them confused with Lonely Ghosts, the new project of one of Help She Can't Swim. These Ghosts, on the other hand, are locals who seem genuinely pleased and proud to be where they are more than lip service could ever cover. They brood in the style handed down from Buckley and Yorke through the first Muse album, filtered through second wave shoegaze and a mighty command of sonic theatrics aided by loops and synths. Aided by the handing out of DVDs of their new video, they get themselves a huge local hero response, which you can't deny even as you wonder if this sort of thing hasn't passed by in wider acceptance terms. 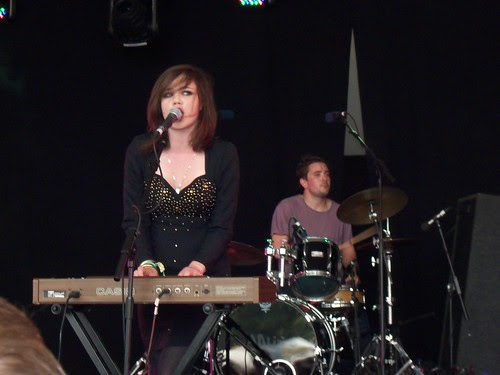 Rose Elinor Dougall isn't quite accorded the same fortune. Already saddled with an early 25 minute slot preceded by ten minutes' changeover, These Ghosts overrunning and the stage's desire to keep on schedule despite there being an impending half-hour gap means she gets cut off after five songs, most of which see her glorious voice often hidden in the mix and the keyboard that provides Another Version Of Pop Song's central hook inaudible. Not that her setlist helps her much, comprising only the first two singles and two songs so new they're not on next month's very fine debut album. The closer, seemingly chosen out of spite only after being given the signal, at least showcases her maven genre-splicing abilities, progressing from almost power ballad beginnings to stratospheric shoegaze over the course of seven minutes. Interesting times. Y Niwl suit the setting even if their guitarist wearing a beanie hat didn't; given a wide open space and a baking hot day their surf instrumentals, all Link Wray twang and Farfisa organ, put aside the suspicion that others do this sort of thing better, so right for this place it seems. 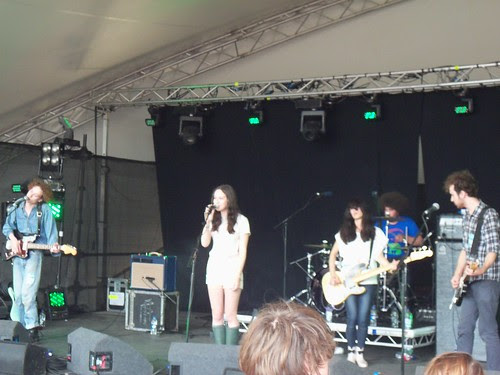 Scraped away from much of their own noise and distortion, Yuck prove to be the weekend's first pleasant surprise, not in reference to Daniel Blumberg bringing his sister on to sing backing vocals on Georgia, explaining that she'd spat water on the crotch of his jeans. On record they can come across as a less inspired take on Pains Of Being Pure At Heart distorted driving indiepop, but with the lo-fi fuzz less apparent other influences are allowed to breathe, most presently Yo La Tengo or Lou Barlow's contribution to Dinosaur Jr, proper melodies deliberately overworked and overdriven but somehow retaining a certain level of uplifting clarity.

Sarah McIntosh, who to all intents and purposes is The Good Natured, played Indietracks a couple of years ago as a sole Casio-touting bedroom keyboard delinquent. Now she leaves all that to a rhythm section and backing tape, preferring to prowl the stage, drop to her knees and generally make like a dark disco Florence in even smaller hot pants. It's better than it could have been, uncertainly straddling post-Marina pop availability, but at the same time the thought occurs that maybe we should come back to her in a couple of years when the femme-pop boom has washed away and she can find her own voice. Finding his own voice in the monitors seems to be a problem for a clearly far from happy Britt Daniel of Spoon, at one point resorting to taking over Rob Pope's mike after finding his backing vocals are often louder than Daniel's lead. Maybe it was this and what seem to be other small technical issues that led to a seemingly uninvolved set, one that drew heavily on Transference while still making room for a surprising The Ghost Of You Lingers, the smart rhythmic thrust often lost on all but those at the front

Maybe it was the aforementioned younger element at work, combined with the vertical takeoff of new folkies this year, but Laura Marling received a hero's welcome on the Obelisk. Her ascent from huddled communities to huge stages would be beyond a lot of people whose songs are so hushed and delicately arranged, but Marling pulled off the feat of keeping the passion and emotional charge of the sentiments when transferred to the big league, even when deigning to do a couple of songs without her backing band. As she has done recently her solo take of Night Terror featured a whistling solo where the violin previously went, with a closing glissando that proves every hit genre needs its own Roger Whittaker. Spectral stuff, but we couldn't stop...

...because over in The Word Arena that bit of Philip Glass-esque twinkly instrumental and monologue that Wild Beasts come on to was starting. Having seen them earlier in the year it's apparent that they've become something special live, a tight unit able to make a well oiled machine out of their arrythmic anti-funk interplay even before you've considered Hayden Thorpe's ridiculous, glorious vocal and the countertenor of Tom Fleming. They're increasingly resembling one of our most special bands, and people are responding with mass dancing in kind. But we couldn't stop...

...because a little way away from the Lake Stage, by the picnic tables and recycling bins, there's a bloke wandering around occasionally howling his head off to the heavens. Some might wonder whether the festival spirit has already overtaken some. A very few, us included, recognise that it's Mark Thomas from Islet, they're about to start, and as usual the line between genius and madness is about to be thoroughly steamrollered.

Most of the talk about them has been centred around their lack of online presence, which is unfair as it suggests that mystique is now a band's only point of entry, and besides they do now. No, what Islet do live with the live band basics (two drumkits, mind) is difficult to quantify in mere words without feeling you're stealing their surprise soul on some level. The music, that's nearly simple enough - no-wave/art-rock percussive Liquid Liquid/ESG/Gang Gang Dance propulsion like Grand Theft Auto motorik, bits of proper songs and melodies and words drifting in and out as much as group yells and moments where they just about pull it clear of total collapse. Switching instruments, pounding away on various drums in syncopation, Alex Williams chasing Mark over the barrier with tambourine in hand... eventually the stage security panic and decide that what was a 45 minute slot will now be half an hour after all. It goes down as well as you'd expect with the band, who after two more songs attempt to launch in the collateral drumming of We Shall Visit and attempt to carry on well after the DJ has put some loud drum'n'bass on and the stagehands are attempting to take the kits apart, half of the band deciding they might as well take one more dip into the steadily growing throng (including Adam *and* Joe, and Frankie & the Heartstrings arriving mob handed halfway through what proved to be the last song) wondering what exactly is happening up there. Peculiar greatness, that's what.

Which is some lead-in for Everything Everything to have to take up. They also do everything, albeit with a lot less manic presence but with a tendency to dip all over the place for their influences - synthpop here, R&B rhythms there, math close at hand, always room for a falsetto three part harmony amid those melodic moments that suddenly get swept away by an awkward moment of angularity. Like the XX, who we saw on this stage in similar conditions last year, it would probably make more sense with the wider knowledge of their forthcoming album, but their ADHD structurality demonstrates that it won't fall victim to safety first tendencies even if there's room for some form of odd crossover in it all.

Not too long after they finish, Billy Bragg, participant in a well observed debate on British identity earlier in the day, wanders past. We'd have said something to him, but it's difficult to know exactly what to say in the immediate circumstances.

Florence & the Machine were the day's headliners, but you pretty much know what that's going to be about and the gender of most of the people watching. This is a serious blog for slowly ageing men in dark back bedrooms, dammit. So, The National. It's well established that they've stealthily become one of the biggest guitar bands in the world without much of the world's music media noticing, but it's obvious that were he so minded Matt Berninger could round up any number of the people in the Word Arena, and doubtless thousands besides, into his own private army for nefarious purposes. It was like the rapture out there. Every break is greeted with a stadium-sized cheer, every song transmuted into an anthem, at times the community choir is louder than the not exactly restrictive guitar sound - Bloodbuzz Ohio and Mistaken For Strangers were particularly good for this. Buoyed on, the set overflowed with power and coiled spring tightness, confidence utmost, emotions on high. Berninger even broke out into the odd dance move, his baritone brooding and outbreaks of anguish somehow seeming more genuine than recorded output has ever managed, whether the heft of Slow Show or Fake Empire's insistent pull. In this situation, with this crowd, and with these songs, their imposing intensity makes all kinds of transcendent sense.
Posted by Simon at 4:24 pm

Cripes Simon you must have been following me round all day :) I pretty much saw 75% of the same bands as you and have said quite a lot of the same things as you over on my Day 1 write up.

I look forward to reading your other reviews. Mine will be going up over the next 2 days.