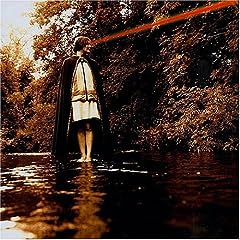 Not that you couldn't have made the observation yourself after her previous album I Am featured almost exclusive drum-only backing, but there are precious few like Scout Niblett. The glib comparisons are to PJ Harvey and Cat Power, two other strong females using alternate recording names to their own, starting from a country/blues post and going in boundary-shredding directions which occasionally but not often come into contact with what everyone else does. Niblett just doesn't fit the archetypal British female solo singer - although she can be warm when she wants to be, for the most part there's very little of what we know as sweet about her octave-scraping voice, while her backing is raw and basically minimal - here an awkward sounding brooding acoustic, then a handful of sustained power chords, there a guesting violin and one-beat drum pattern. Niblett's own musical road to perdition was with grunge, and there's a key to understanding where her fourth album This Fool Can Die Now and its occasional uninhibited vocal yelps and shrill crescendos are coming from, the Kurt model of expressing inner turmoil as primal expression. It's against 'folk' but not anti-folk, which has its place but doesn't come within miles of describing this unholy union of vocal and style.

She's also found a partner to play off on four tracks, Will Oldham, who surely recognises in her signature sound much of his own low-key warped Americana milieu, adding his own dark roots voice to the dances of death Do You Wanna Be Buried With My People? and Kiss. Let Thine Heart Be Warned is where she really takes off, though, Scout starting uncommonly Bjorkish over unidentifiable scraping noise before exploding with huge drums - Steve Albini's got his fingerprints all over this - and fuzzy quiet-loud dynamic bombast. A couple of tracks later it's back to misty Appalachian brooding for Elizabeth (Black Hearted Queen), and a couple of tracks later she's demanding we "put on that suit and get in my car" in a slo-mo Polly Harvey fashion, or perhaps a country raised Patti Smith, on Nevada, a title made to match its expanses of reverbed guitar strokes and huge cymbals. This scan works - two tracks on from that is Yummy, a direct, cracked appeal over weeping strings. Ironically for the first album of hers on which someone else's vocals appear, Niblett is just as individual as ever, but now behind the torn, tortured and uncompromising public face it seems there's a vulnerable, longing Niblett coming to the fore.

LISTEN ON: Let Thine Heart Be Warned
WATCH ON: Kiss

Emmy The Great: Black Lips - Good Bad Not Evil
Posted by Simon at 12:01 am