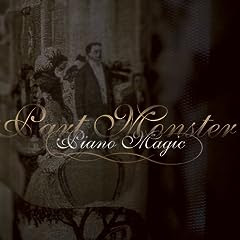 Piano Magic, the ever evolving collective based around sole surviving original member Glen Johnson, remain one of Britain's best kept secrets, celebrated in parts of Europe and subject of a small cult following in America but again gaining little foothold in their home country with ninth album in ten years Part Monster. Currently signed to Spanish label Green Ufos and featuring three Frenchmen in its current five piece incarnation, no two albums are quite the same, from the 4AD Smiths of last album Disaffected to the elegant historical tale telling of their high water mark, 2000's Artist's Rifles. This time around Johnson's painstaking attention to sonic detail, here alongside veteran eclectic engineer Guy Fixsen, alights on a version of what was once dubbed in relation to a previous album as 'ghost rock', an almost accessible ennui-driven shoegaze-suggesting widescreen elegance.

Johnson has always been a wryly angry writer, but it's rarely been as explicit as on opener The Last Engineer. It's unusual enough for a Piano Magic album to start on an upbeat note, never mind as enormous sounding as this, as guitars coruscate and eventually turn in on themselves and downwards towards the delay pedals and blurring effects, enveloping ethereal Philip Glass keyboards, after Johnson composes a last post for Britain's traditional manufacturing bases. Then it abruptly shifts into England's Always Better (As You're Pulling Away)'s This Mortal Coil synth stillness before occasional guest Simon Rivers, of ultrawry east London veterans the Bitter Springs, enters with his own monologue both celebrating and denigrating the nature of Englishness over slowed down mariachi trumpets. And so it goes on - before The King Cannot Be Found has been given the chance to gleefully kicks the shit out of Our Love To Admire (despite preceding that album. How odd) another regular visitor, Angèle David-Guillou (known solo as Klima), appears for Incurable (Reprise)'s Stars-esque gracefully driving indie-rock and Soldier Song, a reminder of Artist's Rifles' baroque electronics, folk arrangements and military personality examination, this time on a decidedly satirical bent. One thing's for sure, nobody sings "bastard" as delicately as David-Guillou. The second half, bar the drone complexity instrumental Great Escapes, is more contemplative and claustrophobic, the ageing melancholia of Halfway Through and the newly re-tremeloed Saints Preserve Us' opening couplet "kick out this notion that anything goes/You’re better off sticking to what you know" suggesting a band, or rather a man, in a state of uncertainty. If it's to do with the musical direction, Johnson shouldn't worry - even if he doesn't receive much in the way of direct reward for it, there are still few better at expressing their fears and ideas.

LISTEN ON: The King Cannot Be Found
WATCH ON: The Last Engineer (live)

Piano Magic: Studio - West Coast
Posted by Simon at 12:02 am

Are there any songs about nicking toilet seats?

None on the face of it. Any reason for asking?

It was an hilarious joke funny based on the fact that there are two people with the name Glen Johnson, one of whom is a footballer who has previously been arrested for said larcenous act.

I was mischievously suggesting that they are one and the same chap, with uproariously amusing results.