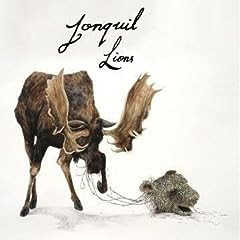 There's something definitely off the beaten track at work here. Jonquil wouldn't kill you if you suggested they were an English folk outfit, or at least used that grand tradition as their initial stepping off point. Yet from this area they craft music that's certainly under 'other', whether indebted to the assorted tentacles of the freak-folk movement or the choral grandiosity that ranges from A Silver Mt Zion to Arcade Fire. In fact, everything mentioned above is worked into opening track Lily, which swells, thrums and choruses like prime Grizzly Bear or Akron/Family, then only three and a half minutes in introduces Hugo Manuel's heartfelt, very English voice lost in the depths before birdsong emerges under something crisply strummed alongside harp. Clearly a lot of thought has gone into how this all develops and intertwines, and it's that intricate skilfulness which right from the off places it as far away as possible from much of its nu-folk brotherhood. And it was essentially all recorded in Manuel's bedroom.

Is it unclassifiable? Maybe, given Lily is followed by Sudden Sun, which starts with pastoral harmonies before lurching into something of a rustic groove as multilayered vocals cry for joy or produce wordless epiphanies, and then how Pencil, Paper threatens to turn into folk's own vocal version of becalmed Sigur Ros-level post-rock, given a place by the squeak of guitar strings and background sighing trumpets. That this is followed by Babe, So Now why No?, almost normal in its drum cycle-driven nature, both throws the listener off the scent and reinforces that once they're off there are no barriers Jonquil see in their pursuit of developing a new strain of harmonic folk-pop. Nowhere is this better exhibited than on the title track, just under two minutes of accordion, synth drone and communal shouting eventually developed with martial drums, all ripped from Constellation Records' back catalogue if first fed through a rural pub. Then, another curveball, as the sound of thundery weather re-establishes the pastoral theme ahead of Here's To The Little Man, an intimate, close miked fingerpicked ballad of hope in deliverance. Whistle Low turns up wearing the hat of the twee, pop moves borrowed from Stephin Merritt accompanied by that accordion again and what may be an autoharp, one of a great range of instruments picked up at will throughout, along with the off-mike sounds - Here's To The Little Man and Subtle Strains are linked by what sounds like the rest of the band re-entering the room - asserting the all in together atmosphere pervading the recording that comes across in its independent listening. It's the imagined sound of Pentangle meeting Beirut in a back bedroom for an informal session, and in terms of its warm, all embracing majesty it's rarely been surpassed this year.

Hugo Manuel, Jonquil: Feist - The Reminder
Posted by Simon at 12:01 am

This sounds great! I really must check it out now...