Sweeping The Nation Albums Of 2007: Number 5 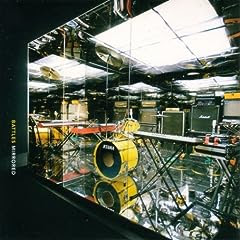 Battles' press doesn't do them that many favours to the curious newcomer. You could easily be put off before you've heard a note by talk of avant-jazz influences, mutated rhythms, dehumanised interplay, complex electronics and unique styles of play, chiefly Ian Williams' method of doing complex guitar tapping with one hand and playing keyboard licks with the other. And, yes, prog. Which is why actually sitting down with Mirrored brings about an odd sense of thinking you've been purposefully misled all these four years or so from their first EP. While the coagulation of influences - Tyondai Braxton an experimental solo artist and son of influential avant-jazzist Anthony, Williams formerly of mathrock pioneers Don Caballero, Dave Konopka of little regarded mathrockers Lynx, John Stanier of post-hardcore standouts Helmet - might suggest a noodling, arrythmic mess, what Mirrored does you could almost - almost - call fun. Indeed, it's the formulation of a style nobody else, Don Cab included, have ever really managed before, and you don't get to say that straight up very often in 2007.

It's just hard to describe in capsule form, that's all, but that's what we're here for so let's give it a go. As clockwork tom toms and snares, all played by the surely inhuman Stanier, and possibly electronic arpeggios are joined by synthetic Seven Dwarves whistling in an entirely different beat on Race In there's already something afoot as supercharged loops are joined by skitering guitars and jet car bass, the effect almost like Philip Glass minimalism in its panorama. Plus jingle bells. All this is however mere warmup for the frankly incredible Atlas, coming on with a double time glam rock beat (actually inspired by the German techno trend schaffel, which its Wikipedia page lets on is directly inspired by T-Rex and the Glitter Band anyway), laced with bass pedal and grumbling synths before Braxton starts singing. Pitchshifted well above human range, of course, but nobody buys Battles records for their lyrical insight. Then, just as the dancefloor tenatively fills, it abruptly breaks down to its component parts, the robot army advancing on pulsing bass-heavy rhythms and playful skitterings around the outside. Hearing the four play off and with each other simultaneously and achieve a few moments of interlocking unity before the vocal re-enters is genuinely thrilling, and even then they find room for an acapella moment and a gradual breakdown. Ddiamondd, even in direct comparison, is just mad, moving at Bugatti Veyron speeds over Braxton vocal cutups and warp speed fuzzy rhythms. Tonto's multi-part ever tightening circular riffs are built on stratospheric Williams guitars, tribal group chants stolen from Animal Collective at their most shamanistic and a gradual slowdown coda that lasts more than two and a half minutes. Leyendecker, conversely, could be a particularly out there Timbaland joint, reminiscent of sometime collaborator of a couple of the band Prefuse 73. No wonder Rainbow goes mad, half the band seemingly challenging the other half to play faster and more intensely, bar the odd avant-garde Looney Tunes break, before exploding five and a half minutes in with overdriven everything. Then it climaxes with quarter-speed Black Sabbath. Bad Trails has to give the album time to cool off after that, its slow burn recalling Warp labelmates Boards Of Canada with rooster-tailing guitar trails. It never quite reaches the heights again until closing Race Out builds on waves of thunderous tom-toms over what sounds like but probably isn't actually backwards loops until parts of Race In emerge for the last minute and makes the listener realise that it's all just thematic after all, but by then, if you'll pardon the wording, the battle's won anyway. Clearly much of this would leave the average record buyer running screaming, but put the mental work in and it becomes music that maps its own path forward, taking a few lessons from what's gone before and transposing them onto a futurist framework. And you can listen to it without your brain exploding.

LISTEN ON: Leyendecker
WATCH ON: Atlas

Johnny Flynn: Jim Page and Artis - Folkpunch
Posted by Simon at 12:01 am